Report of inquiry into Olympic ticket touting controversy to be published 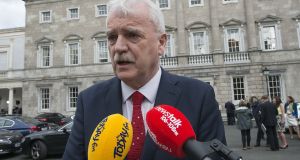 The Cabinet has decided to publish a report into the Rio Olympics ticket-touting controversy which was ordered by Independent Alliance Minister for Transport Shane Ross. It will be published “within the next fortnight or so”.

The non statutory Moran Inquiry, under former High Court judge Carroll Moran, was established in August 2016 to examine the ticket distribution process adopted by the Olympic Council of Ireland (OCI) from London 2012 Olympics to the 2016 games in Rio.

After the final Cabinet meeting before the summer recess on Wednesday, a spokesman for the Department of Transport suggested publication could take place in mid-August.

“The Government decided today to publish the Report of the Moran Inquiry, which was established in August 2016 to inquire into the receipt, distribution and sale of tickets to Olympic Games and ancillary matters,” he said.

“It is envisaged that the necessary arrangements for publication will be completed within the next fortnight or so.”

The Attorney General’s advice was sought and received after one of the parties referred to in the report raised legal matters.

Lawyers for the former Olympic Council of Ireland president Pat Hickey had warned against the publication of the report on the grounds that it could prejudice his right to a fair trial.

Mr Hickey, now back in Ireland on bail, is still awaiting a court date in Rio to face various charges for what has been termed ambush marketing, theft, tax evasion, money-laundering and criminal association.

Mr Hickey has said he is innocent of all charges.

Mr Hickey said in a radio interview last month his Irish legal team had warned Mr Justice Moran against publishing his findings because it could prejudice his right to a fair trial in Rio.

Mr Ross’ Independent Alliance colleague Minister of State Finian McGrath said the report should be in the public domain.

Speaking on his way into Cabinet on Wednesday, he said he would rather not comment on the details of the report.

“My position is very clearly anything in relation to those matters should be published and should be in the public domain,” Mr McGrath said.

The investigation was ordered by Mr Ross following controversy surrounding ticket distribution by the OCI at last year’s Olympic Games in Brazil.

Last month Mr Ross told the Dáil he wanted to publish the report at the earliest possible date but was awaiting advice from the Attorney General.