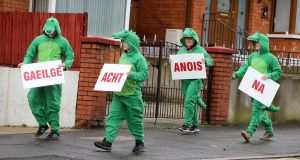 As long as there was an IRA campaign of violence on this island, there was a large section of the Catholic nationalist community, North and South, who wouldn’t dare state openly: “I am a nationalist.”

In Northern Ireland these nationalists are now standing up to be counted for the first time, thanks to DUP leader Arlene Foster and the behaviour of a number of her colleagues.

There are two reasons why in the past many nationalists kept their heads below the parapet: they hated the IRA violence; and they felt ashamed at what was being done in their names to fellow human beings, be they British soldiers, police officers, gardaí, Protestants, Catholics, nationalists, loyalists or republicans.

A common refrain on the lips of Catholic nationalist mothers in Northern Ireland in the wake of the killing of a Catholic, a Protestant, a soldier, a police officer, a member of the IRA or a member or a loyalist organisation was: “He is somebody’s son.”

The leadership in the Assembly and Executive afforded by David Trimble, Ian Paisley and Peter Robinson, in the words of former Northern Ireland secretary of state Patrick Mayhew, “kept the bicycle upright and moving forward”.

Despite many hitches and imperfections in the relationships of Trimble, Paisley and Robinson with their fellow nationalist ministers, a sense pervaded of nationalists bedding in at the heart of government, feeling at last that they had an opportunity to exercise real power in the place where they live.

Installing power-sharing was a major advance – so much so that both the Dublin and London governments took their eyes off the ball in recent years.

So, where are we today? Deadlocked.

The limited liberal tendencies, however, of Trimble, Paisley and Robinson and their involvement with republicans and nationalists at the highest level of government ultimately resulted in their downfalls.

Enter Arlene Foster as leader of the Democratic Unionist Party. Early in her tenure of office she struck a more strident note than her predecessors, refusing to engage in a “Forum on Brexit” in Dublin.

She only reluctantly met then taoiseach Enda Kenny to discuss Brexit.

She opted to support Brexit, but the majority of the people of Northern Ireland voted to remain in the European Union.

This did not deter Foster from parading herself at home and abroad effectively as the prime minister of Northern Ireland, declaring that she spoke for “all” the citizens.

This was despite having presided over the implementation of the Renewable Heat Incentive scandal, which could potentially cost taxpayers more than £400,000,000.

And she refused to stand aside for a short period at the request of Martin McGuinness to allow time to evaluate what had happened.

By now, other pernicious habits were creeping in to practices in the Assembly, with the DUP leadership stifling any and every move by Sinn Féin and other parties to introduce progressive legislation on issues such as same-sex marriage, legacy and an Irish language act.

The DUP, under Arlene Foster’s tutelage, was using a so-called “petition of concern” (a legal instrument designed to protect minority interests such as same-sex marriage) to block movement on all social matters to which they were opposed. The DUP had the necessary numerical strength to do this and ruthlessly deployed the device.

Outside the Assembly chamber, there were growing rumblings in all nationalist areas, with comments such as “What are nationalists getting up there at Stormont?”

One also heard: “Isn’t the DUP giving them the runaround up there at Stormont?”

Bile was coming to the surface in the Assembly and Foster was not checking it.

Some DUP elected members wilfully set about insulting nationalists interested in the Irish language while on their feet in the Assembly chamber and outside it.

Chief among the culprits was former minister Gregory Campbell, who mockingly blurted in the Assembly “Curry my yogurt can coca coalyer”, a distortion of the Irish-language term “Go raibh maith agat, a Cheann Comhairle”.

On another occasion, Campbell jibed Sinn Féin Assembly member Raymond McCartney, who took part in the hunger strikes in 1980.

In the past two weeks Campbell has on BBC Radio referred to the Gasyard Féile in Derry as the “Gasyard Failure”.

Referencing an exhibition of photos by Martin McGuinness, he added: “The Gasyard failure should be a real bundle of laughs this year. First Marty’s photos (don’t know if there will be the obligatory warning at start in case those of a nervous disposition are viewing), then the serial election loser George (the cat) Galloway. Roll up, roll up, get your tickets please!”

This habitual deriding of Sinn Féin is one thing, but the contempt for the Irish language was another.

A decision by DUP Minister Paul Givan in December 2016 to unilaterally kill off the Líofa Gaeltacht Bursary Funds Scheme – funds for children to go to the Gaeltacht in Donegal to learn Irish – was interpreted by nationalists as revenge for the challenge to Arlene Foster to temporarily step aside over her handling of the Renewable Heat Incentive. No evidence has been found to show Ms Foster personally committed any wrong.

One member of the GAA community pointedly remarked in a reference to Sinn Féin that “they couldn’t even protect the bit of money for the children going to the Gaeltacht”.

It should be stated that Paul Givan hurriedly restored the £50,000 fund – but the damage was done.

Sinn Féin had been getting the message from the ground of unease at its performance dating back to the Assembly Election in 2016, when Gerry Carroll of People Before Profit topped the poll in west Belfast and veteran civil rights campaigner Eamonn McCann took a seat in Foyle, also for People Before Profit.

It was the dismissal of an Irish Language Act or Acht na Gaeilge by Arlene Foster in February this year in a pre-election comment that ultimately did for her in the nationalist psyche, particularly in the face of an extremely ill co-equal First Minister Martin McGuinness.

Crudely rejecting the granting of a free-standing’ Acht na Gaeilge (Irish Language Act) as sought by Sinn Féin and the SDLP in the lead into the March Assembly election, she stated: “If you feed a crocodile it will keep coming back and looking for more.”

That was final nail in Arlene Foster’s coffin as far as nationalists were concerned.

The demand for a free-standing Acht na Gaeilge is today’s “One man, one vote” of the Civil Rights campaign

Martin McGuinness had been advised by the hierarchy of Sinn Féin after Christmas that grassroots feelings were at breaking point. The political edifice was toppled by Mr McGuinness on January 16th, 2017. He died on March 21st.

The bringing-down of the Assembly and the Executive proved about as popular in nationalist Northern Ireland as the IRA ceasefire on August 31st, 1994.

Nationalist voting trends have spoken for themselves since Martin McGuinness stepped down as deputy First Minister, bringing an end to the Assembly and the Executive.

The demand for a free-standing Acht na Gaeilge is today’s “One man, one vote” of the Civil Rights campaign of over half a century ago.

It is yesterday’s banner today, and it screams:

“What do we want?

“Equality and Parity of Esteem.”

“When do we want it?

The demand for a free-standing Irish Language Act is emblematic of a homogeneous, radicalised nationalist community attitude for which nothing short of full-blooded “parity of esteem” will guarantee a restoration of a devolved government.

To nationalists, the failure of unionism to acknowledge parity of esteem is its original sin.

The demand for Acht na Gaeilge is the political 11+ test being set by nationalists for the DUP and unionism to move into the big political school with a restored power-sharing administration on the basis of equality and fair play.

On March 4th, 2017, the News Letter – a Belfast-based newspaper read predominantly by unionists – had splashed on its front page: “Northern Ireland is today waking up to a fundamentally altered political reality: unionism is no longer a majority in the Stormont chamber for the first time since the creation of the Province a century ago.”

The message coming through to the DUP from nationalism is loud and clear: the days of being treated as second-class citizens are over, as are the days of tolerating abuse of political power.

She has done more to harden the attitudes of normally moderate nationalist opinion than any of her former fellow first ministers, Trimble, Paisley or Robinson.