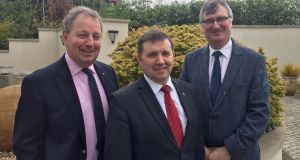 From left, Danny Kinahan, Robin Swann and Tom Elliott after a UUP party executive meeting in east Belfast, as the Ulster Unionists decided not to field candidates in three constituencies in Northern Ireland in a bid to help other parties defeat Sinn Féin. Photograph: David Young/PA Wire

The Ulster Unionists have decided not to field candidates in three constituencies in Northern Ireland in an effort to help other parties defeat Sinn Féin.

The UUP has withdrawn from the race in north and west Belfast and in Foyle.

The party executive has also agreed that its two outgoing MPs - Tom Elliott and Danny Kinahan - will again be the party’s candidates in Fermanagh & South Tyrone and South Antrim respectively.

Party leader Robin Swann said the decision not to run in the three constituencies was designed to increase the chances of returning candidates who take their seats in Westminster - unlike abstentionist Sinn Féin MPs.

West Belfast has long been held by Sinn Féin, with the DUP and SDLP holding north Belfast and Foyle respectively.

“The rationale behind it is we want to see and we want to hear 18 Northern Ireland voices in Westminster,” said Mr Swann.

“Because going forward - going into the negotiations around Brexit and what’s going to happen around the future of Northern Ireland and our Executive - it is important that there are 18 MPs taking their seats, and we need those voices to be heard.”

There is expectation that, like 2015, the UUP will again enter a pact with the DUP in a number of constituencies.

Mr Swann insisted no discussions with the DUP had yet taken place.

“I am due to meet the leader of the DUP [Arlene Foster] on Monday to discuss possibilities,” he said.

After the UUP executive meeting in east Belfast on Saturday morning, Mr Swann was pressed on media speculation that former UUP leader Mike Nesbitt would run in south Belfast and party veteran Danny Kennedy would stand in Upper Bann.

Mr Swann said Mr Elliott and Mr Kinahan were the only candidates selected to date and no other decisions had been made.

“We haven’t selected candidates for any other constituency as of yet,” he said.