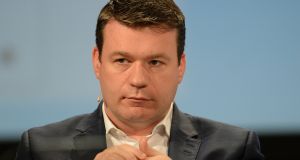 Labour TD Alan Kelly said it was ‘totally wrong’ and ‘a disgrace’ that a company owned by the Sisters of Charity would own the new maternity hospital site. Photograph: Cyril Byrne

Minister for Health Simon Harris must implement a compulsory purchase order if necessary to buy the religious owned site at St Vincent’s Hospital for the State, Labour health spokesman Alan Kelly has said.

The Labour Party conference in Wexford this morning passed three emergency motions on the proposed move of the National Maternity Hospital to the St Vincent’s site.

The move is in jeopardy after the board of St Vincent’s announced it plans to review the status of the project. The National Maternity Hospital is due to move from Holles Street, Dublin, to St Vincent’s, where it will be run by an independent company.

However, this company will be owned by the St Vincent’s Healthcare Group, whose sole shareholders are the Sisters of Charity.

The three motions at the Labour conference were tabled by the Dublin West constituency, where Joan Burton is the local TD, Labour Women and by the Ardarra/D O’Donnell branch in Tipperary, where Mr Kelly is TD.

The motions, unanimously passed, variously reject the “proposed ownership and governance arrangements of the National Maternity Hospital on St Vincent’s campus as unsatisfactory and unacceptable”; “condemn the recent decision to place the new National Maternity Hospital in the ownership of a religious order”; and calls for the entire “St Vincent’s site and the folio of properties currently owned by the St Vincent’s Healthcare Group be taken into public ownership”.

Mr Kelly said that with the deal being reviewed, Mr Harris should “get control” and implement a compulsory purchase order if necessary “for the people or Ireland”.

He described the arrangement as “totally wrong” and “a disgrace”.

“In their order, mothers babies and young women were literally abused and treated disgracefully,” he said of the Sisters of Charity. “In any other western society, would this even be considered? It can’t happen, it won’t happen and we will not allow it to happen.”

He said Mr Harris had been “outraged” a number of years ago when St Vincent’s used their public hospital as collateral for a loan towards a private hospital.

Mr Kelly also said that the fact that the Sisters of Charity had not made their full contribution to the redress scheme “shows form, it shows what they really think”.

And he said Independent Ministers had been silent on the controversy.

Proposing one of the motions, Ms Burton called on Mr Harris and the government to publish whatever deal had been reached with the Sisters of Charity on the hospital site.

“Publish the deal, publish all of the side deals, all of the arrangements,” Ms Burton said, adding that the entire project must be brought entirely into public ownership.

“Were you confused, dumbfounded, and worried by what you heard, what you read, what you saw this week?” she asked party delegates at White’s Hotel.

She also asked if Mr Harris had done enough to reassure people and assuage their concerns.

“I certainly wasn’t and I don’t think may of the women of Ireland were,” she said.

She also criticised the religious orders for not contributing their full share to redress schemes for survivors of child abuse, which she described as “rather nefarious”.

She described Mr Harris as a “minister who appears hapless and hopeless and who appears to have been rolled over by a stronger negotiating team on the other side of the table... And we’ve seen that before.”

Sinead Ahern of Labour Women said that Fine Gael had “once again shown their contempt for women’s health”.