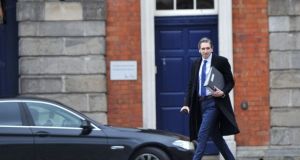 Minister for Further Education Simon Harris said small changes have resulted in a “five-fold increase in the number of people qualifying for support, with possibly 29 more”. Photograph: Dara Mac Dónaill

The number of students in direct provision who will qualify for the Susi grant for third level education has increased five-fold after Government changes to qualifying criteria.

Last year just five students qualified for Susi (Student Universal Support Ireland) grants for either fees or maintenance or both but 25 students have qualified in the 2020/2021 academic year following a review of the support scheme.

Up to 29 other students may also qualify. The Department of Further and Higher Education is waiting for further documentation from them, which the department said could be as simple as a copy of their passport or proof of address.

Minister for Further Education Simon Harris said the current system “needs improvement and to reflect the many realities faced by learners from such a variety of backgrounds and experiences”.

The system was “too restrictive” and under changes in support systems, young asylum seekers no longer have to spend three years in the Irish school system in order to qualify for educational support at third level.

The latest revision to the student grant scheme means asylum seekers will no longer need to have completed the Leaving Cert or have spent three years in an Irish school to be able to apply for a student grant when moving into third level.

Applicants will still need to have been resident in Ireland for a combined period of three years in order to apply for the support. They must also have already been accepted on to an approved post-Leaving Certificate course or undergraduate course.

Students who have applied for refugee status, subsidiary protection or leave to remain, and have been in the system for at least three years, can apply for the support.

Mr Harris said the small changes have resulted in a “five-fold increase in the number of people qualifying for support, with possibly 29 more.

“We also made changes to post-graduate support in Budget 2021 increasing the support they can access.”

Just two direct provision students qualified for Susi support in 2015 and in 2016, which dropped to one student in the following two years before increasing to five last year.

The Minister said that “if small changes like that can make such change for people, this review could be incredibly beneficial for students, their families and the country as a whole.

“The more people we can have in education, the more flexible we can be, the better our third level system will be.”

With the changes in the system students can expect support in paying the €3,000 third student registration fee while maintenance grant support ranges from €305 or €755 depending on whether a student lives within 45 km of the college or university up to the full rate of €3,025.

In exceptional cases there is a special rate maximum of €5,915 in grant support.