If images are shared with intent to harm, penalty could be up to seven years in prison 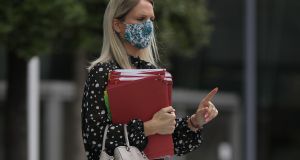 Minister for Justice Helen McEntee will bring the proposed amendments to a Bill originally proposed by the Labour Party to Cabinet on Tuesday. Photograph: Nick Bradshaw

Anyone sharing intimate images of another person without their consent, even without any intent to cause harm, could face a fine of €5,000 and 12 months in prison under proposals being brought to Cabinet this week.

It will be irrelevant if the image was taken with the consent of the subject. It is the subsequent distribution that will become a criminal offence.

Minister for Justice Helen McEntee will bring the proposed amendments to a Bill originally proposed by the Labour Party to Cabinet on Tuesday. If approved, the Bill will be debated at committee stage in the Dáil next week, and is likely to become law next year.

Ms McEntee’s officials have collaborated with the Labour justice spokesman Brendan Howlin in drafting the amendments, and the legislation is likely to have all-party support.

The Harassment, Harmful Communications and Other Related Offences Bill, will create a series of new offences to cover the transmission of intimate images, including by computers and phones, without the consent of the subject.

It is understood the new laws will not specify the means by which the images may be transmitted, in order to cover all forms of online and offline communications that may cause harm to victims.

Under the proposed new laws, judges may consider it an aggravating factor if the sender was in an intimate relationship with the subject of the images when they come to pass sentence.

The amendments to be brought to Cabinet this week will also broaden the scope of existing harassment legislation to cover consistent communications to or about a person that are intended to cause harm, increasing the penalties for the most serious offences to 10 years in prison.

The Labour Bill was first proposed two years ago, and the effort to outlaw online bullying and harassment was supported by the families of some young people who took their own lives after prolonged periods of online abuse and harassment.