Fine Gael, Fianna Fáil and Greens on brink of deal to form government 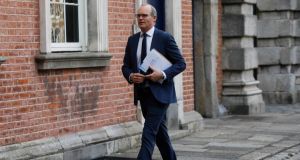 Fine Gael, Fianna Fáil and the Green Party were on Thursday night edging towards agreement on forming a coalition government for the next five years, having overcome significant hurdles in the long-running negotiations.

Sources said that a final agreement was possible on Friday, but others cautioned the talks might run into the weekend. Senior figures in each party indicated they believed it was now a question of “when not if” a deal was concluded.

Intensive negotiations yielded agreement on a text concerning several issues which had previously proved difficult. While participants in the talks say “nothing is agreed until everything is agreed”, there is provisional agreement on the crucial 7 per cent reduction in greenhouse gas emissions and how to achieve it.

Although sources on different sides of the negotiations agreed that “major sticking points” had been overcome, discussions were continuing last night.

Fine Gael sources played down talk of a breakthrough, but acknowledged they expected a deal to be agreed shortly.

Last night, Tánaiste Simon Coveney told a meeting of the Fine Gael parliamentary party that some “heavy lifting” still needed to be done in the talks.

Taoiseach Leo Varadkar said Fine Gael wanted to get the government deal right, adding that Fianna Fáil was in a “rush” for “obvious reasons”.

Mr Varadkar also said issues that are left unresolved in talks on a programme for government can fester and cause problems later in a government’s term, citing the Fine Gael-Labour coalition of 2011 to 2016 as an example.

Some Fine Gael TDs on the call were worried about individual constituency capital projects after Mr Coveney said the Project Ireland 2040 plan would be reviewed. Mr Varadkar said the plan should be maintained but also mentioned the difficult economic circumstances ahead.

Sources said an insistence by the Greens on more aggressive measures to reduce biogenic methane – caused by livestock – was causing some problems for Fine Gael and Fianna Fáil. Sources in those parties expressed concern that the agriculture sector would be asked to take on more climate action measures, when the 7 per cent could be reached by measures in other sectors.

Other issues yet to be signed off include the public finances (such as a Fine Gael insistence that taxes could be cut if the economic circumstances allow and how to tackle the deficit), carbon taxes, the State pension age and other issues.

The position of Green deputy leader Catherine Martin remains unclear with Green Party and other sources unsure about whether she will back any final deal. Her support – or opposition – is expected to be crucial to the ratification of an agreement by Green party members.

Other aspects of the emerging agreement are also being discussed in political circles. A wide-ranging reorganisation of government departments is being discussed, though The Irish Times understands that the Department of Children is unlikely to subsumed into the Department of Education, as had been previously discussed. However, a new department of higher education and research is expected to be established if the new government is formed by the three parties.

It is also expected that a powerful new department responsible for the economy, jobs and future economic development is to be created to succeed the Department of Business, and there is some speculation that Mr Varadkar could be its first minister (and tánaiste) if, as expected, the Fianna Fáil leader Micheál Martin becomes taoiseach for the first half of the new government’s term.

Other changes being discussed are a new department responsible for transport, planning and climate change, likely to headed by one of the Green ministers.

Meanwhile, the Cabinet will be told on Friday that a number of government departments will have to be allocated extra money in the months ahead, as they will breach their spending ceilings.