‘I am certainly not ruling out any future arrangement with Fianna Fáil, either confidence and supply or coalition’ - Taoiseach 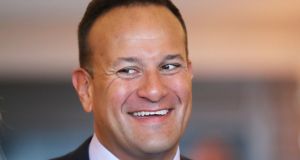 Taoiseach Leo Varadkar has said that if Fianna Fáil had the majority after the next general election then Fine Gael would have to consider a Confidence and Supply Agreement. Photograph: Niall Carson/PA Wire

Mr Varadkar also said his willingness to consider supporting Fianna Fáil in a confidence and supply arrangement from Opposition would only apply if Micheál Martin’s party won more seats than Fine Gael.

The Taoiseach was speaking in Cork on Friday afternoon at the conclusion of the two day Fine Gael parliamentary party think in.

When asked if he would consider a so-called “grand coalition” after the election, Mr Varadkar said: “I would. Essentially any general election is going to depend on the results.

“My intention and expectation is that we win the election, are the largest party again, we form a government and we head a coalition. But I am certainly not ruling out any future arrangement with Fianna Fáil. Either confidence and supply or coalition.”

However, he said he will not underpin a Fianna Fáil led minority government unless Mr Martin wins more seats than him at the next election. It means he would not facilitate Mr Martin’s election as Taoiseach if Fianna Fáil, the Greens, Labour and others formed a coalition in a situation where Fine Gael was the largest party in the Dáil.

“We certainly would not entertain a situation whereby we were the largest party in the Dáil and we were then somehow asked to facilitate the second and fourth and fifth party forming a government.

“Let there be no doubt about this. It is my intention and my plan and my expectation that Fine Gael will win the next election when it comes in May 2020

“While confidence and supply has worked reasonably well for just over three years now, a majority government would be better for the country and that’s what I want us to be in a position to do.”

Fianna Fáil facilitated the formation of a Fine Gael-led government after the last election, promising to abstain on key Dáil votes to enable the party to form a government and pass budgets and other necessary legislation.

Earlier on Friday when asked in an RTÉ interview if he believed the UK was committed to the Good Friday Agreement, Mr Varadkar said he did.

On the topic of the next general election, Mr Varadkar said he hopes that when the election comes “people will judge us in the round.”

Mr Varadkar said he was running a country not a business with a balance sheet.

“We need to give money where it is needed without cutting services.”

He acknowledged that homelessness remains a major challenge, but said that while figures have levelled off, a lot more needs to be done.

When asked if he gave credit to Fianna Fáil for supporting the Government during a difficult time, he said: “they’ve done the right thing, the responsible thing.

“Their role has been important and I regret that they were not willing to agree to an extension, that they declined to do so.

“I believe they deserve some credit for not opposing, for facilitating this government.”

On Thursday, Mr Varadkar said that he wanted the next election to take place in May of next year.