Brexit: ‘Hard border impossible to avoid’ in no-deal crash out

Even soft border would mean eight crossing points may be needed, according to Revenue 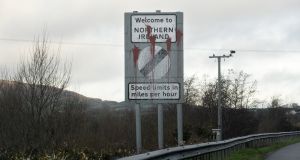 The European Commission has already told Ireland that in a no-deal Brexit ‘you will have a hard border’. Photograph: Dara MacDonaill/The Irish Times

The Government has continued to maintain the fiction that somehow there could be an invisible border after a no-deal Brexit, despite all the evidence pointing to the contrary from the EU, international law and experts.

Despite Cabinet Ministers being taken aback at the scale of the shock that will ensue after a crash out, The Irish Times had reported the Government as saying it is “in discussions with the European Commission about protecting the single market in the event of a no-deal, while maintaining an open Border between North and South”.

There is more than a bit of the dead parrot sketch to that piece of hopeless optimism. A no-deal Brexit means a lot of things, but it certainly does not mean an unchanged scenario along the 499km border.

Tánaiste Simon Coveney acknowledged as such at the briefing when he admitted to colleagues it was inevitable there would be some checks on goods imported across the Border. He is said to have insisted those checks would not take place at the Border. He mentioned “mobile checks”.

Or as he said, somewhat nebulously, in July: There will be “some checks somewhere”.

But this seems to fly in the face of evidence from elsewhere.

As early as January this year European Commission spokesman Margaritis Schinas put it bluntly when he told Ireland that in a no-deal Brexit scenario “you will have a hard border”.

“A hard border will be politically impossible to avoid,” says Prof Edgar von Morgenroth of DCU, an authority in this area. He says such a frontier is required not only under EU law but also under World Trade Organisation rules, to which Britain would be subject.

He noted the contradiction in internal logic of the arguments being advanced by the Government because in this scenario there will be no backstop. Maintaining a seamless border was “the exact reason a backstop was required”, he says.

Prof Morgenroth adds that EU laws do not specify where the customs checks have to take place. That would allow for mobile customs checks in some cases, but certainly not all. It could never work with animals, he says.

“You cannot drive around the State with animals before they are checked. It makes no sense. In the foot and mouth outbreak in 2001, the animals were supposed to be checked in the North and they were not,” he says.

Generally, there will be little wriggle room, according to Prof Morgenroth. “Ireland would become the only EU state with a third-country border that does not have a border [frontier posts]. If you do not have these facilities you risk the whole of the single market. It’s not about legitimate trade, it is about preventing illegitimate trade,” he says.

His views mirror those of the Revenue Commissioners, which assembled a team of nine researchers soon after the Brexit vote, to examine the implications for this State.

Its findings on the Border were particularly pointed and led to Enda Kenny’s administration calling a halt to its work over fears that the paper would become a self-fulfilling prophecy. In many ways it was prescient, particularly in the context of the pass that has now been reached.

With more than 90,000 businesses trading with the UK, with an increase in customs declarations from 1.6 million to 20 million, some of the response could be achieved electronically, it said.

Revenue portrayed a non-Border after Brexit as akin to a unicorn.

“It is probably somewhat naive to believe that a new and entirely unique arrangement can be negotiated and applied to the land frontier.”

It said the choice was between a “hard border” as in the eastern frontier, and a “soft border” as in Sweden and Norway, which is not a member of the EU.

“Even in [Sweden and Norway], certain controls are unavoidable; and a number of designated and resourced crossings will be required,” concluded the paper.

That border between Sweden and Norway is some 1,100km long with 10 recognised main crossings. IT systems allow goods to be declared before they leave the warehouse and drivers can show it to customs officers on a smart phone app as they arrive at the crossing.

Giant scanners scan X-ray freight containers that have been singled out for inspection. Automatic number plate recognition, or ANPR (similar to the M50 in Dublin), allows officers to scan cars with identification cameras for potential security concerns.

It’s advanced and relatively free of hassle but it is not seamless. Average waiting time is eight minutes but it can take an 90 minutes for truck drivers. And there is a lot of paperwork. Moreover, Norway is in the aligned European Economic Area as well as being in the Schengen area, that allows free movement of people. Britain will not be in either agreement post-Brexit.

As the Revenue paper pointed out that even for this high-tech border, “certain controls are unavoidable and a number of designated and resourced crossings will be required to meet the needs of legitimate trade and to satisfy our EU obligations”.

Can the Border be policed?

The Revenue concluded that even with a soft border, a total of eight designated crossing points might be needed.

It said a “physical customs presence” would still be required to engage with legitimate traders and meet a range of EU obligations.

It also said that a visible regime of mobile controls and checkpoints would be required to monitor and control the remaining multitude of “unapproved” roads to deter and detect abuse.

Getting such a system in place could take years, with a huge investment required as well as negotiations to insure both systems were compatible.

And APRN, as Prof von Morgenroth pointed out, cannot tell if a car is fitted with false ringer number plates or is carrying contraband. So some physical checks will be unavoidable.

The regime would be far more onerous for animals and food products. The EU rules are strict – live animals and products derived from animals can only be imported at an approved border inspection post.

The Revenue paper was unequivocal on this point: “Customs cannot permit the release into free circulation of goods or animals not already cleared by the relevant co-located border inspection post.”

Essentially, the implication of this is a Border inspection post will need to be in situ at, or very near to, the physical Border between North and South.

There will myriad other issues also. Those travelling between North and South on buses or train may need to be checked by customs as they travel across the Border.

Temporary importation could also become a big headache. The Revenue paper instanced the Ploughing Championship. “It sees a significant volume of equipment moved into Ireland from Northern Ireland and the UK for the duration of the event. If the UK were no longer in the EU, all of these products would need to be declared under the temporary importation procedure with guarantees of ATA carnets [passport for goods] required for the period of importation.”

It continued: “A further concern would be that equipment [eg, large construction equipment or even just tools] moves a few miles over and back across the Border with Northern Ireland today.

“Given that these temporary movements would now be across the Border of the EU customs territory, controls would be unavoidable.”