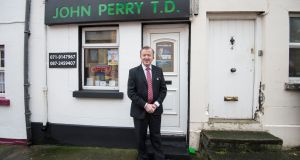 Sligo-Leitrim TD John Perry failed to be selected at the constituency convention but was later added to the ticket in the wake of his litigation, which cost the party an estimated €500,000 in legal charges. Photograph: Brenda Fitzsimons /The Irish Times

Fine Gael needs “a lot more transparency in the operation of the party”, its Ardfheis has been told in a debate on reviewing selection convention policy.

Delegates supported a motion to review procedures for conventions in the selection of election candidates after trenchant criticism of current policy,

It follows a High Court challenge from Sligo-Leitrim TD John Perry who failed to be selected at the constituency convention but was later added to the ticket in the wake of his litigation, which cost the party an estimated €500,000 in legal charges.

Mr Perry’s case was not mentioned during the 15 minute debate.

Delegates also adopted a motion to review term limits for the national executive and gender quotas on the executive. One delegate suggested a person could be co-opted for one term only and would stand at the next election on their track record, or a minimum of .25 of a quota to be considered elected.

Louth delegate David Lyons said “we do need a lot more transparency into the operation of this party.

He said the problem with selection convention procedures was the lack of full transparency and sharply criticised the issuing of strategy or directives from headquarters to conventions just before they started.

“It arrives down in a sealed envelope on the night. You only find out.... you don’t even have a vote because the directive has closed it off.”

He said the whole way the directive was delivered “gives the impression there is a secret committee somewhere that is deciding these things”.

Mr Lyons added: “The secrecy does us no good. People arrive expecting a vote really get very badly annoyed when they discover they are not getting a vote.”

John Danagher, who proposed the motion, said it was 22 years since the party introduced its “one member one vote” policy for selection conventions.

Most conventions have gone well “but there has been the odd one which hasn’t”. He said they would have upwards of 250 conventions when they begin the 2019 local elections process in 2017.

“We have made mistakes and it’s important that we acknowledge that and seek to improve the situation.”

He stressed that the review “can’t just be a process of the executive council considering the matter. We have to involve the membership the constituencies in that process as well.”

They had to consider the transparency around the process. “There are certain things around the way rules operate where perhaps there isn’t as full an understanding of what the rules actually mean.”

Mr Murphy said the rules around who was eligible to vote at conventions were often the issue that gave rise to the greatest difficulties. He added that it was clear that “coming back and saying that no change at all is required is not an acceptable position. It will be a question of developing changes”.

Delegate Dan Sullivan also criticised the levels of transparency in the party around Ardfheiseanna and said “we have no idea..what topics we’ve chosen not to discuss, what policies we have adopted without members ever having an input into them”.

Stephen Ray of Dublin Bay North referred to the controversial selection convention in which Minister and TD Richard Bruton failed to get the nomination and had to be added to the ticket in the wake of a directive on gender quotas.

“By contorting directives in the way they are, whoever formulates them, it really alienates an awful lot of members and there’s certainly a better way of going about it.”

Kildare North TD Bernard Durkan said a directive “is sometimes a protection for the party, sometimes it appears to be an attempt to subvert the convention”.

“It is put there to ensure in so far as possible that the party would put forward the strongest possible ticket,” said Mr Durkan. “The convention might not always see it that way but that’s what it intends to do.”

Mr Durkan told the debate: “I’ve heard over the years there can be no legal challenge, that we’re in house here and we don’t do that sort of thing. That’s obviously not true.”