Coronavirus: Irish people ‘can do better’ on wearing facemasks 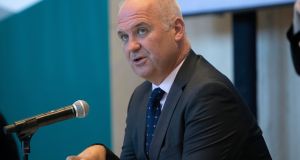 The Chief Medical Officer, Dr Tony Holohan, has said Irish people “can do better” when it comes to the wearing of facemasks in public as part of an effort to suppress the spread of coronavirus.

Speaking at a National Public Health Emergency Team (NPHET) briefing on Monday night, Dr Holohan said he believes “we can get further progress” on the implementation of guidance to wear masks, scarves or other shields that cover the nose and mouth in situations where social distancing is difficult to achieve, such as in shops or on public transport.

Dr Holohan said that while shopping on Saturday last, he noticed that the majority of people were not wearing masks. “It is our clear recommendation that people in those settings should wear [face coverings] and maybe the shops and retail environments might take steps to remind the public of the importance of the advice we’re giving.”

He added there was no plan to make the wearing of masks mandatory at this time, and cautioned that some people had legitimate medical reasons as to why they could not. He said the issue would be “kept under review”.

“But right now we will redouble our efforts to advise the public about the importance of wearing masks in public and retail situations.”

The Department of Health guidelines state: “Wearing a cloth face covering is recommended in situations where it is difficult to practise social distancing, for example, in shops or on busy public transport.”

Dr Holohan was speaking after the NPHET confirmed an additional four deaths of people who had contracted Covid-19 in the State, bringing the total number of fatalities associated with the infection to 1,683. The team also confirmed another nine people had been diagnosed with the disease, meaning 25,207 cases have been identified in the State since the pandemic arrived here.

There were no increases in cases or clusters among the Roma or Travelling communities, or in institutions catering to the homeless, while a single additional cluster and four additional cases were identified in the direct provision sector.

Dr Holohan cautioned that the low figure of new cases should not be taken as evidence that the fight against the virus had been won. “Mission is not accomplished,” he said. “We’re only halfway through this,” he added, referring to the fact the State had just entered into the second of four stages of unwinding lockdown measures.

Asked about a letter released by dozens of academics and clinicians calling for an extension of lockdown measures in an effort to practically eliminate the virus, Dr Holohan said there was a need to “strike a balance.”

“We can’t stay with the restrictive measures that we have across society for any longer. We think now is the right time in terms of easing restrictions.”

He said that a comparison between Ireland and New Zealand, which declared itself “virus-free” on Monday”, was “not a reasonable one”.

“That’s good for New Zealand to be in that situation. It’s a country at the other end of the world from the epicentre of this infection, which was Europe. Europe is an open political, cultural, social, economic group of countries,” he said. “Our part in Europe as a small economy, an open economy, is completely different to how New Zealand is organised.”

As well as many more shops opening, movement restrictions were further eased on Monday with people permitted to travel as much as 20km from their home or within their county borders from now on.

While the two-metre rule for social distancing was widely respected at newly-opened stores, a minority of shoppers were seen wearing face coverings.

Speaking as the second phase of easing the lockdown began on Monday morning, Minister for Health Simon Harris said the two metre social distancing rule for the hospitality sector could be eased in the coming weeks.

“Two metres is definitely safer than one, however NPHET have recognised that there may be some settings where the two metres may not be easily applied,” Mr Harris said.

Mr Harris said the issue will be reviewed by NPHET over the next week to fortnight to provide guidance.

“We need to do this in a public health led way, not by ‘he who shouts loudest.’

“What looks slow today, looks prudent in a few weeks. We are showing that we are willing to adapt.”

Research published by the Department of Health on Monday showed that a growing majority of adults (62 percent) felt that the worst of the pandemic was over, with a decline in the number of people who thought Ireland was likely to see a second wave - declining from 63 per cent at the end of May to 54 per cent today.

But the number of people receiving the wage subsidy scheme has increased for the fourth week in a row and has now stands at 529,000. That represents an increase of over 20,000 on the number receiving the payment last week.

* An early version of this story incorrectly stated that 1,000 academics and clinicians had signed a letter seeking a change in policy over Covid-19. While the letter had attracted over 1,000 signatures, a minority of signatories were researchers and academics.