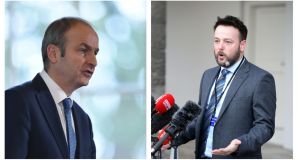 Fianna Fáil leader Micheál Martin (left) and his SDLP counterpart Colum Eastwood have been keeping the detail on a party merger secret from most of their own party members. File photographs: The Irish Times/Reuters

Fianna Fáil and the SDLP are poised to announce a phased process leading to their integration, according to senior sources from the two parties.

Ultimately the alignment will result in “one all-island party which will be called Fianna Fáil”, said one well-placed Fianna Fáil source.

The final stage of negotiations is still under way, but a “significant” announcement is expected to happen early in 2019, possibly as early as next month, said sources from Fianna Fáil and the SDLP.

Fianna Fáil leader Micheál Martin and his SDLP counterpart Colum Eastwood have been keeping the detail secret from most of their own party members. Others central to the negotiations are Fianna Fáil Donegal TD Charlie McConalogue and party general secretary Sean Dorgan, and for the SDLP deputy leader Nichola Mallon.

The parties, said one source, are expected to engage in a “narrative” of announcements, with details released on an incremental basis leading up to the Fianna Fáil ardfheis in Dublin on February 23rd, where Mr Eastwood and Ms Mallon “would get a big show”.

Sources said the plan also was to portray the new alignment as being “bigger than simply the SDLP and Fianna Fáil”. It was hoped to “unveil new faces from business, culture, the arts, agriculture, and from other parts of civic society” as members of the new grouping, some of whom would be future candidates in the North.

The first stage of the union is likely to be the parties setting up joint procedures to agree all-island policies, said the sources.

It is yet to be decided how the two parties will approach the first electoral test in Northern Ireland, the local elections in May.

One well-placed figure said it might be too early for candidates to run on a joint platform, and it might be a case of “SDLP candidates standing with the endorsement of Fianna Fail” although that issue is not yet fully resolved.

He said both parties were aware of the risks, particularly should the SDLP perform poorly against Sinn Féin in May, which would be viewed as a boost for Sinn Féin in advance of the next general election in the Republic.

A senior Fianna Fáil figure said that ultimately the two parties would merge under the Fianna Fáil standard. “The timescale for full integration is still being worked on; there is no clear timeline for that yet,” he added.

There has been a steady decline in the fortunes of the SDLP over the past 20 years. In the Assembly elections after the 1998 Belfast Agreement the SDLP won 24 seats compared to Sinn Féin’s 18.