People Before Profit is calling for a relaxing of the laws relating to access to medicinal cannabis. Video: Enda O'Dowd 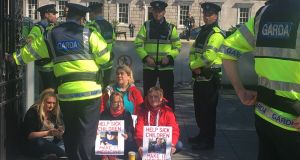 Vera Twomey and her supporters carry out a sit-down protest for rights to medicinal cannabis at the gates of Leinster House in Dublin on Thursday afternoon. Photograph: Cyril Byrne/The Irish Times

Protesters for rights to medicinal cannabis blocked the gateway to Leinster House on Thursday afternoon, preventing any cars parked inside to leave the complex.

The sit-down protest by Vera Twomey and supporters is part of a campaign to establish availability of the drug for medicinal purposes.

Ms Twomey earlier this year walked from Cork to Dublin to highlight the case of her daughter, whose condition she says has hugely improved since taking medicinal cannabis, which is not legal in Ireland.

She began a vigil outside the gates of Leinster House earlier this week, asking to meet Minister for Health Simon Harris.

On Thursday afternoon, Ms Twomey and a number of supporters sat down at the gateway of the Leinster House complex, effectively preventing any cars from leaving.

As many as 100 cars, many owned by rural TDs and Senators, were in the car park.

The three women were surrounded by gardaí, who spoke to the women but who initially made no effort to physically remove them from the gateway.

After about three hours, gardaí lifted the protesters out of the way.

Ms Twomey has previously spoken to an Oireachtas committee about her case. She was supported by People Before Profit TDs Gino Kenny and Richard Boyd Barrett.

Mr Kenny asked for Mr Harris to stop what he described as “stonewalling” and meet Ms Twomey as a matter of urgency.