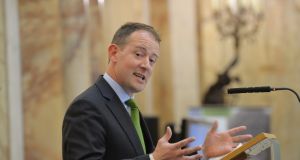 Seán Sherlock: said microplastics were an entirely unnecessary source of pollution and likely to have environmental impacts. Photograph: Alan Betson

The Government has reversed a decision to oppose a Labour Party Bill banning the use of microplastics and microbeads in personal care items including scrubs, soaps, lotions and toothpastes.

Minister for Housing Simon Coveney had originally planned to reject the Prohibition of microplastics Bill on the grounds that it could place Ireland in breach of EU Treaty articles on the free movement of goods and that it was flawed in definitions, enforcement and its “level of ambition”.

But in the Dáil on Thursday he told the Bill’s author, Cork East Labour TD Seán Sherlock, that the Government would not oppose the legislation but would probably abstain and allow it to proceed on the basis that “if and when we produce the Government’s legislative response to this whether in the foreshore Bill or in a separate piece of legislation after the work that needs to be done first”.

Mr Coveney said they all wanted to “ban the production and use of microbeads and microplastics where appropriate because it is a significant contributor to marine litter and is unjustifiable and unnecessary”.

In November last year, the Minister rejected a similar Bill from Green Party Senator Grace O’Sullivan on the grounds that he would bring forward his own legislation on the issue.

Mr Coveney said his legislation would also provide the basis for a network of marine protected areas. He had written to the EU commissioner for environment Karmenu Vella seeking a formal derogation from EU market rules.

The Labour Bill aims to ban toiletries and cosmetics containing microparticles that make the product more abrasive but which are not caught in water treatment systems because of their size but released into rivers and the sea.

Mr Sherlock said microplastics were an entirely unnecessary source of pollution and likely to have environmental impacts. There was evidence to suggest they were entering the human food chain, “although microplastics in seafood are not currently thought to represent a human health risk”.

He added that microplastic debris in marine environments was growing in volume and could be ingested by marine life, leading to physical harm, reproductive or toxic effects.

The Labour TD said a number of companies in the EU were voluntarily phasing out some types of microplastics in products. The US is phasing in a ban on such products over the next two years and the British government has accepted a similar proposal.

A number of EU countries have called for a ban but a European Commission report said introducing a ban would be more complicated than the laws used in the US and Canada. Mr Sherlock said the option of unilateral action by EU members remained.

Green Party deputy leader Catherine Martin acknowledged that Mr Coveney had taken steps since he rejected her party colleague’s Bill and that he had “facilitated an extensive public consultation process”.

Ms Martin said “no one political party has ownership of environmental issues, but for as long as this is the perception, the environment and ultimately the people will lose”.