Miriam Lord: Alliance plays the hits on its first anniversary 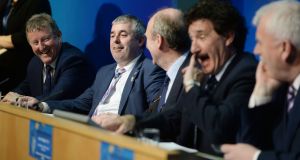 The Independent Alliance: a great bunch of lads.

They commandeered Government Buildings yesterday to showcase to the nation their magnificent welcome for themselves.

The event coincided with a huge spike in calls to Garda stations from distraught musicians reporting the theft of their trumpets.

Some people might ask why the Independent Alliance was allowed use the Government Press Centre for what amounted to a mutual admiration session and personal celebration of how they’ve remained in their dream jobs for a full year.

It was for health and safety reasons. A basement location was necessary to contain the racket created by the trumpet blowing and backslapping.

You see, tomorrow, the Government will be a year in power. The five TDs of the Independent Alliance wanted to mark this by listing all the ways they have made a mark.

A small group of journalists gathered to hear them reprise their greatest hits, performed under the baton of their mentor Shane Ross, aka Winston Churchtown.

Winston declared himself “really very proud” of what the alliance has achieved so far.

They were all very proud yesterday.

“I’m going to ask everyone just to speak for a few minutes.”

Finian McGrath, who had been scribbling furiously on his speaking notes, gave him a sideways look.

As the only one of their number in possession of a full ministry, Ross held sway at the top table, positioned in the middle with two colleagues on either side.

The Flood Brothers – Seán Canney and Kevin “Boxer” Moran – sat to his right with the raven-haired John Halligan and impossibly happy McGrath on the other side.

Ross summoned Finian (super junior with a high chair at the Cabinet table and second in line of seniority) to the microphone.

The TD for Dublin Bay North leapt eagerly to his feet and bounded across the platform, bellowing his opening words before he reached the podium.

“Delighted to be here,” he boomed.

For him, it was a great honour and privilege to get elected and even better again to become Minister of State with responsibility for disabilities.

“I’m 12 months into it and, can I say, I really love my day job. I’ve a great passion and commitment and, of course, all I really want is a bit more time to survive in here and get on with the job.”

Good on ya, Finian.

He outlined his highlights, some, sadly, unrecognised. “You won’t hear it in the broader society or reported in the national media” he told the national media, before moving to his plans, his priorities, “my long-term vision.”

Then he succumbed to a bout of the Obamas.

There is always more to be done. Can they do it?

After his mile-a-minute speech, Finian bowed out abruptly with an Elvis-style “thanguverymuch” and tore back to his seat, leaving us emotionally drained, with four more speakers to come and Winston Churchtown preparing a self-indulgent encore.

McGrath turned to Ross and loudly whispered: “Did I do okay? Did I go overboard?”

John Halligan treated everyone to a brief discourse on Brexit before admitting the alliance had a tough time getting used to government. But they’re going great guns now.

“I’ve only come back from Holland last week with the European Space Industry,” he said.

A TV cameraman trained his lens on the table. Winston removed his spectacles and Finian struck a pose, chin jutting out and resting on an upturned hand. Seán and Boxer weren’t bothered.

Halligan stressed the line, repeatedly hammered home by his colleagues during their hour-long promo, that the Independent Alliance stepped up for the hard task of government when others shirked the responsibility. “We had the courage of our convictions.”

Now, a year on, if they hadn’t been brave “where would we be?”

Canney couldn’t wait to declare his love for his comrades. “I am so proud of the fact that I am a member of the Independent Alliance.”

He then announced he was handing over responsibility for the Office of Public Works to his flood brother, Boxer Moran, on June 2nd, as agreed.

Naturally, it was “a great honour” for Seán to be able to reveal this because Boxer is a great man and “a very good genuine person who believes in people, who believes in getting work done”.

He promised to be there for Boxer every step of the way in the continuing journey on the flood alleviation front.

Back at the table, Halligan croaked to Ross. “Was I any good?”

Winston’s reassurances were cemented by such a crunching slap on the back from Finian it was a miracle he didn’t cough up a kidney.

And so to Boxer, deeply honoured to be elected in the first place and delighted to disappoint those naysayers who predicted the Government wouldn’t last. He can’t wait to start his stint as a Minister of State.

“Lookit, I’m looking forward to my role. I won’t tell you a lie.”

Matters took on an Oscar-night twist as he turned to Winston and gushed “I probably wouldn’t be standing here today without Shane.”

The five don’t have any problems with Fianna Fáil keeping them in power. None whatsoever.

Finian happily disclosed that not a day passes when he doesn’t give thanks to Micheál Martin for allowing him to stay another day in his job.

“We are where we want to be and we work so hard at it we don’t have time to enjoy anything else” added Canney.

A great bunch of lads. On that, they are unanimous.

Now enough with the trumpets.

Ciara Kelly: I remember looking at him, thinking, ‘I’ve got to keep you alive all day by myself’