Kenny: ‘I can’t believe you travelled this distance to ask that question’

Taoiseach having no talk of FG leadership during Canada visit 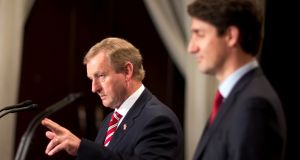 The Taoiseach may have travelled half way across the world to discuss international affairs and corporate tax with the Canadian prime minister Justin Trudeau, but the questions surrounding his leadership of Fine Gael followed him across the Atlantic.

Mr Kenny, on what is widely expected to be one of his final overseas visits as Taoiseach, made it quite clear that he was in no mood to discuss the issue of the Fine Gael top job, as specualtion mounts as to when he will announce his intentions.

A Fine Gael spokesman denied on Friday morning that any hotels had been booked to facilitate the vote of a new leader. The Irish Examiner had reported a number of places had been chosen for Friday May 26th. However the party said this was inaccurate and no venues had been booked.

Some Fine Gael TDs and Senators expect Mr Kenny to finally make his departure announcement at their parliamentary party meeting next Wednesday. But he was not up for a discussion when the Irish delegation quizzed him on it. Daniel McConnell, the Examiner’s political editor, lead the charge in a testy exchange with Mr Kenny when McConnell asked when he would be stepping down.

Taoiseach Enda Kenny refused to answer questions over his leadership during a press conference with Canadian PM Justin Trudeau pic.twitter.com/BzgLnSf7Xy

Here is the transcript of the exchange:

Daniel McConnell: “With respect Taoiseach you haven’t answered the question. I asked you specifically will you deal with it next Wednesday at the parliamentary party meeting.”

Enda Kenny:” I just said to you Daniel, I can’t believe you travelled this distance to ask that question.”

Enda Kenny: “My function here is a discussion with the Canadian prime minister to discuss the opportunities that present themselves for investment and job creation on either side of the Atlantic.”