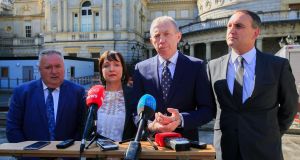 Fianna Fáil members have launched a Private Members’ motion calling on the Government to backtrack on its decision to close 159 post offices in 159 rural communities around the country.

Fianna Fáil spokesman on communications Timmy Dooley described the proposed closure of the post offices as a “planned attack” by the Government and An Post to eliminate a large proportion of the postal network which could create a “domino effect” on surrounding businesses and small shops in the area.

An Post announced last week the locations of the 159 post offices which are set to close in the coming weeks and months as part of a restructuring plan. Minister for Communications Denis Naughten will face questioning before a parliamentary committee on Tuesday on the controversial plan to close so many.

Fianna Fáil members said on Tuesday that the retirement of postmasters and postmistresses was being used as “a smokescreen” to cover up the closure of so many rural postal offices.

The removal of the service will place an “intolerable burden” on the lives of the elderly and more vulnerable who rely on their local post office for pension payments and to pay bills, Mr Dooley warned, adding that elderly users would struggle to continue their transactions online.

“We don’t believe that an essential public service should be viewed in terms of profit and loss,” said Mr Dooley. “We believe the viability of the villages and the people around it is more important.”

He noted that a PSO payment was already used to subsidise public transport services and projected it would cost €8 million to extend the payment to post offices.

“It is for the State and the Government to step in and ensure that these services are maintained and I believe the way to do that is a direct transfer from central exchequer to An Post to deliver an important service. We do it in so many other ways; hospitals, community centres, nurses, doctors, guards, which we pay from central exchequer.”

Asked to comment on the high number of post offices which closed between 2000 and 2011, during which time Fianna Fáil was in power, Mr Dooley said offices had closed due to a lack of demand in the area. “The difference between then and now is this has been a planned attack by the Government and An Post to eliminate a very significant section of the post office network. It’s happening in villages where there is a demand to retain the service.

“Post offices cannot be viewed as simple accounting units with a focus solely on profit and loss. They are immeasurable part of community life across Ireland, but especially in rural Ireland, and the Government must listen and must intervene.”

1 Eyewitness to Auschwitz: ‘We were held in the wagons like animals’
2 Woman’s body most likely dismembered with power tool – murder trial
3 Election 2020: 10 key questions to ask candidates on your doorstep
4 Find out if your local TD is a landlord or owns multiple properties
5 Election 2020: Peter Casey to stand in both Donegal and Dublin West
Real news has value SUBSCRIBE