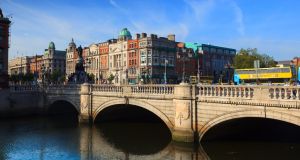 Dublin urgently needed a ‘single strong voice and strong leadership’ to provide solutions to the many challenges faced in the region. Photograph: iStock

Dublin City Council has urged Taoiseach Leo Varadkar and Minister for Housing Eoghan Murphy to resist “metrophobia” and allow Dublin to have a directly elected mayor.

It has emerged in recent days the Government is proposing that Cork should have the country’s first elected mayor instead of the capital.

Lord Mayor of Dublin Nial Ring said Dublin urgently needed a “single strong voice and strong leadership” to provide solutions to the many challenges faced in the region.

“Most central governments throughout Europe and beyond actively promote large city regions, thus reinforcing the importance of the metropolitan scale in the planning of land use, infrastructure and public services,” he said.

“The failure to promote and reform metropolitan governance in the Dublin region has resulted in dysfunctional urban and regional planning.”

Our enemies are legion, they are tough, they are strong, and they will continue to act against the interests of this city

There was, he said, an “anti-Dublin bias” in the mindset of central Government and a clear “metrophobia” that must be eliminated.

“The vandals in the Department of the Environment fear what would happen to them, they fear their power would be taken away,” he said. “ I am absolutely shocked that Mr Murphy, who in many ways has been a champion for Dublin, is going to allow his own officials dictate this. He has effectively gone native on this issue.”

Independent councillor Ruairí McGinley said Tánaiste Simon Coveney, who is from Cork, “seems to have got one up on the Taoiseach”, and it was important the council drew this to the attention of Mr Varadkar.

Labour councillor Dermot Lacey said successive governments had acted against the interests of Dublin “allied to officials in the Custom House who will do everything possible to ensure we don’t ever have a real local government system in this country”.

Ireland can be transformed by a reform of local government, he said, but “our enemies are legion, they are tough, they are strong, and they will continue to act against the interests of this city in the future as they have in the past”.

Councillors of all parties agreed that Mr Ring should write to Mr Varadkar and Mr Murphy to insist Dublin be the first region to have a directly elected mayor.

The creation of a mayor for the Dublin region, which would be elected by the residents of Dublin city and county, was vetoed in 2014 by Fingal county councillors.

The three other Dublin councils – Dublin City, Dún Laoghaire-Rathdown and South Dublin – were overwhelmingly in favour of the proposal.

Minister for the environment at the time Phil Hogan had determined that all four local authorities would have to vote in favour before the mayoral proposal could be put to a plebiscite of Dubliners.

Separately, councillors have agreed to hold a special meeting later this month to hear proposals from prospective candidates for the presidency.

A motion on a proposal to stop the sale of the former Magdalene laundry on Sean McDermott Street in Dublin to a Japanese hotel chain will also be heard at this special meeting, which will be held on September 13th.