Faultline that would lead to Brexit evident in Haughey-Thatcher meetings 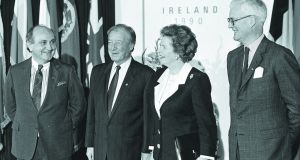 The nascent faultline between Britain and the EU that would eventually lead to Brexit was evident 30 years ago during private meetings between taoiseach Charles Haughey and British prime minister Margaret Thatcher.

During the course of the meetings Thatcher excoriated the European Commission as an undemocratic “politburo”, belittled the European parliament as “not a parliament at all” and was wholly dismissive of a suggestion of greater political union.

Ireland held the presidency of the European Community (as it was known then) in 1990, at a time of political uncertainty in Europe, caused by the fragmentation of the USSR and the reunification of West Germany with East Germany.

Haughey met Thatcher twice in Downing Street in April and June that year for detailed bilateral meetings which primarily focused on the future of Europe. They were to be the last one-on-one meetings between the leaders as Thatcher resigned in November 1990 and Haughey stepped down in early 1992. Their decade-long political interactions had been marked by early cordiality, then distrust, and finally a stronger relationship during Haughey’s second term.

During 1990, German chancellor Helmut Kohl, French president François Mitterand and commission president Jacques Delors had proposed greater political union among the 12 EC members following the end of the Warsaw Pact and the reunification of Germany.

When Haughey broached the subject of political union with Thatcher, he said it could be “as minimalist or as maximalist as we make it”.

The British prime minister replied curtly. “There was first of all an economic community. Then we widened it to develop European political co-operation. We have enough to digest at present. If we go further we will create even wider divisions,” she told Haughey.

She then compared Ireland and the UK favourably to other member states, saying they were far more developed.

“Germany has been in existence for some 40 years. Belgium is simply the Walloons and the Flemings. The Dutch were part of the Hapsburg Empire. On the other hand, Spain is a proud nation and so is France,” she said.

She noted, after unification, “Germany will be so powerful that it will dominate everyone.

“The community is completely different from when [French president Charles] De Gaulle joined. Then he was dealing with a very weak Germany. Our troops were in Germany to support him. [De Gaulle] would not have signed the treaties in present circumstances.

“They will be dealing with a powerful and dominating nation of maybe 80 to 90 million people with a new confidence – a new euphoria.”

Thatcher reserved her harshest criticism for the European Commission, which she said was anti-democratic.

“The days of appointed commissioners must be numbered. We must give power to the council of ministers. I am not handing over authority to a non-elected bureaucracy...

“We must take away the power of initiative from the commission. Can we get this through?”

The taoiseach replied: “I don’t think so.”

“They are just a new politburo,” she added.

“The commission was necessary for the European Community to start off, but it is a totally non-democratic power structure now. It is not responsible to the European Parliament or to any other parliament. What we need there is a proper, professional civil service to serve the council ministers. We must metamorphose it into that.”

Haughey replied: “I don’t disagree. We don’t want any more powers for the European Parliament at any rate.”

Thatcher said: “Kaput! It is not a parliament at all.”

Thatcher said that she and Haughey were accountable to their parliaments. “I must to go parliament tomorrow to justify what I have done today. [Spanish prime minster Felipe] González goes three times a year. [François] Mitterand never goes. [Helmut] Kohl goes quite infrequently.

“With you and me there’s intimate and instant accountability. Italy was never one nation. Portugal is struggling and needs help. How can this group of people form a union?” she asked.

Thatcher emphasised the disparate nature of European countries during the two meetings, claiming the Italians “will continue not to pay taxes” and berating Greek prime minister Andreas Papandreou for “petty interference” by lecturing her on the rights of part-time workers.

“Italy quite cheerfully propose this and that and then just as cheerfully ignores that that does not suit them. Try to force this process too far and we will all become subsidiaries of Germany,” she said.

“This is why we think you should take a major part in this debate,” said Mr Haughey.

“If you give away your powers of taxation you have lost your sovereignty. In talking of a single currency, Delors must have had a rush of blood the the head. We are not going to have a single currency.”

She continued: “I am not in a position to commit my country for seven to nine years ahead. I don’t know what is going to happen in the USSR. I don’t know how Germany will develop.”

When Haughey asked her about expanding the membership of the community from 12, she was more favourable, saying Norway, Austria and Sweden should not be turned down. She also said a door should be kept open for Turkey. “Above all I don’t want Turkey to fall back into the Muslim world,” she said.

She returned to the theme of political union. “After the [second World] war our industry was devastated. German industry was flattened. They reconstructed their industry, with Marshall aid [the plan to finance the redevelopment of Germany], from the ground up, with the most modern technology.

“Their workforce is highly efficient. They will buy German – as the Japanese buy Japanese and the French buy French. They are highly efficient and totally ruthless. You talk about the European Community. In the end there will only be three powers in the world: the US, Germany and Japan. The rest of us must really stand together.”