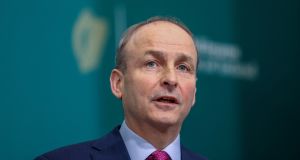 Senior Government figures fear that if there is widespread infection here with the new variant of Covid-19 which has been detected in the UK, existing restrictions will be insufficient and a hard lockdown will be needed to stop the spread of the virus.

This could see the country returning to the restrictions which were imposed last March, sources fear.

While the Taoiseach Micheál Martin yesterday stressed that schools would open as planned in January, sources say that position would have to be reviewed if the growth in cases accelerated to the point where thousands of new cases were reported every day.

There were 970 new cases announced last night, and that number is expected to pass 1,000 today.

Tánaiste Leo Varadkar also said that the situation for non-essential retail - currently allowed to stay open - would be reviewed if the case numbers continued to increase rapidly.

There is growing alarm in Government that cases are set to spiral in the coming days, after public health officials told ministers yesterday that cases are currently growing by 10 per cent a day.

Ministers were told on Monday that the growth rate was 6.5 per cent, but yesterday senior officials from the National Public Health Emergency Team corrected that, telling ministers it was now 10 per cent.

The Minister for Health told the Cabinet meeting yesterday that they could be looking at 1,900 new cases a day in a week’s time - assuming the rate of growth did not increase significantly.

Nphet is scheduled to meet today to consider the latest trends, and will issue advice to Government afterwards. Sources expect that the group will recommend that non-essential retail be closed and that the country adopt the full level five restrictions.

Meanwhile, Minister for Transport Eamon Ryan has defended the pace of the vaccination programme and the latest round of Covid-19 restrictions, saying that the aim was to provide the time to get the vaccine rolled out and in that way to protect the country.

A safe January was “our resolution” Mr Ryan said on Wednesday morning. However, he warned that it would take time to get the vaccine distributed.

Mr Ryan’s comments come a day after it was announced that the State will enter its third lockdown on Thursday, Christmas Eve, as a range of restrictions take effect between then and the new year in an attempt to control surging levels of Covid-19 infections.

The Government will continue to monitor and review the situation, but it cannot give “false expectations” that this would be a short three-week period of restrictions, he said.

“In all likelihood it will have to keep going until we’re in a safer place,” he said.

“Everything we’re doing is on an evidence basis,” he said of the decision to allow non-essential retail remain open. “We’re not seeing any indications of transmission from the retail sector.”

Mr Ryan said that to date the sector had operated in a “very careful manner” and it also provided 40,000 jobs.

There was also no evidence of cases from gyms which were important as they provided people with the ability to maintain their physical and mental health.

However, Mr Ryan said that if numbers associated with the retail sector began to rise then the Government would have to review the situation.

“We have to heed the public health advice,” he told the programme.

When asked on RTÉ’s Morning Ireland if shops in the Republic should remain closed after Christmas as will be the case in Northern Ireland, Ms McDonald said: “Well, yes, our central premise is that to keep any of us safe on this island, we have to keep all of us safe. I would have thought it was a matter of just basic common sense, that on a small island with a relatively small population mass, we are a single unit for the purposes of public health.”

When asked again if non-essential retail in the Republic should be closed from Saturday, Ms McDonald said that “from the very beginning” (of the pandemic) she had been asking “the Dublin Government” to spearhead an all island approach.

“I support Dublin and Belfast getting their act together and actually having the single all island approach that we need to keep people safe,” she said.

As for the reopening of schools (North and South), Ms McDonald said schools would have to open in a safe manner and the situation would have to be assessed closer to the date when they were due to reopen.

Ms McDonald expressed disappointment that the Northern Executive had not ruled to halt flights from the UK. “We will press for this matter again,” and she hoped the Taoiseach would help Sinn Féin in this endeavour.

The party leader said she supported the reimposed restrictions (in the Republic), but said that guidance was “useless” unless the restrictions were “properly enforced and invigilated”.

Testing and tracing systems “north and south” needed to be strengthened otherwise they left the public “always vulnerable.”

Mr Martin announced the restrictions on Tuesday in a televised address from the steps of Government Buildings after Cabinet approved the measures.

As expected, bars and restaurants will shut from Thursday, as will hairdressers and beauty salons. The Government pledged that schools and creches would reopen as planned after Christmas, and retail outlets will be permitted to remain open, though will be told not to hold post-Christmas or January sales.

Gyms, leisure centres and swimming pools will remain open, and outdoor training can continue. But no sports matches can take place apart from those at elite level.

Travel between counties will be banned from St Stephen’s Day, but people who have already travelled for Christmas will not be asked to return home. However, once they return home after their visit, no new inter-county travel can take place.

Home visits by members of two households can continue until December 26th, but will then be reduced to just one household. After January 1st, home visits will be banned completely.

Later Tánaiste Leo Varadkar said that although the decisions would be reviewed in mid-January, people could expect the lockdown to last until early March.

There were another 970 new cases of the virus recorded on Wednesday, and a further 13 deaths.