Explainer: Three scenarios in race to be Ireland’s next European commissioner

Simon Coveney, Mairead McGuinness and Frances Fitzgerald are in the race to succeed Phil Hogan 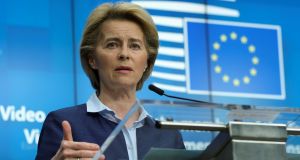 Discussions are continuing between the party leaders today on the potential Irish nominee to the European Commission to replace Phil Hogan. With three names circulating, there are three potential scenarios.

The Government ignores the request from commission president Ursula von der Leyen to nominate a man and a woman and just forwards – as is its right under the European treaties – one name. It is likely to be Simon Coveney. But this would be received with some displeasure in Brussels and could affect the portfolio allocated to the new commissioner. While there has been extensive contact back and forth between Brussels and Dublin on the issue, Government sources acknowledge there will be no guarantee of a particular portfolio for any nominee. They also concede that the chances of retaining the trade job are slim. So in this scenario, there is a danger that Mr Coveney becomes commissioner alright, but in a job of little importance. That is the outcome sources say he wants to avoid at all costs.

The Government nominates Mr Coveney and Mairead McGuinness. Once there are two names sent to Brussels, the Government loses control of the eventual outcome. Dr von der Leyen is understood to rate McGuinness highly, but she is less favoured by Fine Gael ministers, who believe the job should go to one of them. They also say that the request for two names has no basis in the treaties, and that the commissison is already – at 14 to 12 – pretty well gender balanced. Ms McGuinness has also not served in the senior positions that Mr Coveney has, and so has less of a claim on a big portfolio. It would be a significant rebuff to a member state not to pick its foreign minister and former deputy foreign minister, but that is what some in Government fear would happen. From Mr Coveney’s point of view, this would be a political humiliation that he may not be prepared to risk.

The Government nominates Mr Coveney and Frances Fitzgerald. The former tánaiste and justice minister Fitzgerald confirmed her interest in the post yesterday. As a first-term MEP (she was elected to the European Parliament last year) she has less experience of Brussels than Ms McGuinness, but she is closer to Fine Gael ministers than her colleague and may be a more acceptable pick for them. But some people think she is a “decoy runner” – a credible nominee but unlikely to be chosen ahead of Mr Coveney by Dr von der Leyen. That still leaves the question of which portfolio the Irish nominee would be allocated.