Plan subjected to ‘systematic and forensic annihilation’ by Brussels

EU Commission president Donald Tusk says that's Britain's decision to leave the EU has caused the border issue in Ireland, and it is up the UK to help solve the problem. Video: EU Parliament 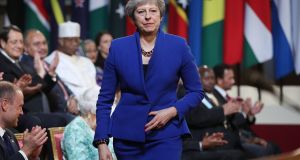 Britain’s prime minister Theresa May has ruled out remaining in a customs union after Brexit, instead proposing two alternative models. Both of which were shot down by the EU, according to the report. Photograph: PA

The European Union has rejected British proposals for avoiding a hard border in Northern Ireland according to the Daily Telegraph.

British prime minister Theresa May’s plan for avoiding a hard border was subjected to “a systematic and forensic annihilation” this week, the paper has reported.

“It was a detailed and forensic rebuttal. It was made clear that none of the UK’s customs options will work,” a source told the paper.

Last month, Ms May said remaining in the EU customs union would “not be compatible with meaningful independent trade policy” and proposed two options for avoiding a hard border while retaining the ability to set tariffs.

Ms May has ruled out remaining in a customs union with the EU after Brexit, instead proposing two alternative models.

The first, a “customs partnership” would see Britain collecting tariffs on behalf of the EU for goods entering the country en route to Europe and applying its own tariffs to imported goods destined for the British market.

The Telegraph reports that this was rejected by the EU on three grounds – that the EU could not allow a country outside its supervision mechanisms and IT systems to levy duties and that it unfairly placed the burden of collecting tariffs on business.

It was also rejected as implementing the scheme on the EU side of the channel would be too expensive.

This too was rejected by EU states who are said concerned about setting precedents for ‘turning a blind eye’ with countries like Turkey, while it was pointed out that other ideas like having authorised economic operators fell short of what was needed to avoid a border.

At a briefing in Brussels last week, one ambassador put up his hand and asked if anyone could tell him how to open an export-import business in Ireland, “because it is going to be a great business if there are no customs controls”, according to an account obtained by the Telegraph.

A powerful cross-party group of MPs are set to force a vote in the House of Commons next week calling on Ms May’s government to seek to remain in a customs union with the EU to avoid a hard border in Ireland.

The motion, which has been tabled by 10 select committee chairmen including Conservatives Nicky Morgan and Sarah Wollaston, will be debated next Thursday.

A vote on the motion will be non-binding but the debate will increase pressure on the British government to keep the customs union option alive following a massive defeat on the issue in the House of Lords on Wednesday.

The motion notes the importance of frictionless trade with the EU for British manufacturing and “further notes that the free circulation of goods on the island of Ireland is a consequence of the UK and Republic of Ireland’s membership of the EU customs union”.