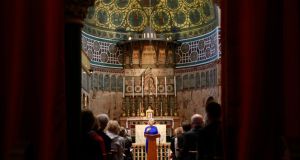 The European Union might integrate more smoothly after Brexit, once it no longer has a “permanently reluctant member in the room”, the former European Commission secretary general Catherine Day has said.

Speaking at Newman University Church in Dublin, where she gave the Barrett Family Lecture 2018, Ms Day said that she saw “no room to hope” the UK would change its mind about leaving the European Union. But she also said that she saw no “domino effect” and that Europe would continue to enlarge, taking in countries in the Balkans “one or two at a time”.

In the absence of the UK, she predicted in Will the EU Survive Brexit?, the “euro and Europe” would become synonymous, with smaller states that had resisted the single currency now being “pushed” into joining it.

She also said that security and defence were “an area where Europe would have to step up to the plate”. Although most states would remain in Nato, “economies of scale” in European defence forces could deliver similar “boots and helicopters”.

Ms Day told the audience, many of whom were students of the Nanovic Institute for European Studies at the University of Notre Dame, the steward of the church, that Brexit could ultimately be good for relations between Britain and Ireland, as Britain seeks an external relationship with the EU. “It is just that we need a bit more enlightenment in certain parts of London for that to happen.”

She said in many ways the EU had not played fair with Turkey, keeping it “dangling” for 40 years. But she added that there were many things to consider, including that Turkey would become the unions’s largest member state on entry and that some countries would raise the issue of Christian and Muslim differences. Of the future of the EU, she said, “It may not last 1,000 years, but it will be here for a long time to come.”

Doctors ‘shooting themselves in foot’ by campaigning against FG, Varadkar texted Ó Tuathail