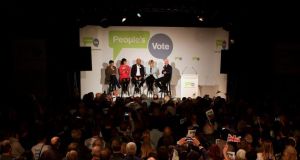 MPs could delay Brexit if they are unhappy with a final deal by sending the British government back to Brussels to renegotiate it, according to a new analysis of the role of parliament in the process.

A report by the Institute for Government, a think tank close to Whitehall, rejects the assertion by Theresa May’s government that MPs will face a choice between endorsing the deal or leaving the EU with no agreement at all.

“The government has a massive political incentive to talk up the chaos that would ensue if parliament did anything other than approve its deal. It is not surprising, therefore, to hear ministers arguing that the only alternative is to leave the EU without a deal – meaning no transition period and no legal guarantees for UK and EU citizens,” said Raphael Hogarth, one of the report’s authors.

“The facts, however, are messier. If parliamentarians object to a particular bit of the deal, or to all of it, they could ask the government to renegotiate. The real questions then would be political: could the present government survive this, and would the EU 27 be prepared to return to the table?”

More than 1,000 people attended the launch in London on Sunday of the People’s Vote, a campaign to put the Brexit deal to the people in a referendum

The UK and the EU hope to reach agreement by October on two major documents outlining the terms of the United Kingdom’s withdrawal from the union and its future relationship with the European Union.

The government has promised to put the withdrawal agreement and future framework, together, to a “meaningful vote” in parliament. If the motion is approved it will be followed by a Withdrawal Agreement and Implementation Bill, which will enshrine the agreement in British law.

The Institute for Government report says that, although MPs will not be able to amend the withdrawal agreement itself, they can attach amendments to the “meaningful vote” motion obliging the government to seek a better deal.

“MPs can force ministers back to the negotiating table and, if they do, the government’s timetable could be unachievable. If MPs were to send ministers back to Brussels to ask for significant changes to the deal, it is likely that Brexit would have to be delayed,” said Hannah White, another of the report’s authors.

More than 1,000 people attended the launch in London on Sunday of the People’s Vote, a campaign to put the Brexit deal to the people in a referendum. MPs from four parties were at the launch, including the Conservative Anna Soubry, Chuka Umunna of Labour, the Greens’ Caroline Lucas and the Liberal Democrat Layla Moran.

“We have got to get a majority in the House of Commons for the proposition of this people’s vote,” Mr Umunna said. “That means at the very least my party, the Labour Party, needs to be true to its values and support this.”