Miriam Lord: After the bunfight, Brendan breaks out the bonhomie 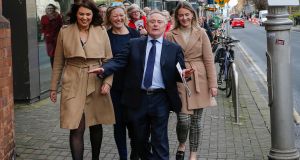 “That was some bunfight,” laughs Brendan Howlin, still bemused by the bad boy antics of his two hosts during a most unruly leaders’ TV debate.

He has finished canvassing along the main street in Dún Laoghaire with candidate Juliet O’Connell because he has to race off to Newstalk to do an interview with Ivan Yates, the cocky hectorer-in-chief from the night before.

The bellowing former politician turned bookie turned bankrupt turned broadcaster turned blusterer opened the debate on Virgin Media by insulting his seven guests, all there as leaders of parties in Dáil Éireann. He called them a bunch of “charlatans and chancers” before rubbishing their spending plans.

“Some bunfight,” repeats the Labour Party leader, who now has nine general election campaigns under his belt but has never quite experienced such a bonkers episode of political broadcasting.

“I’m doing an interview with him at five o’clock today and I’m thinking of starting off with ‘You know what Yates? You’re a chancer!’ You’re a complete charlatan and a total chancer!”

But he didn’t, because Brendan is too polite for that.

As a veteran of these campaigns, he knows how to talk to people. Utterly pleasant, exuding good humour and bonhomie and always ready to break out the “Building an Equal Society” leaflets to earnestly guide any voters who express an interest through the “key points” of Labour’s plan.

Nobody said a harsh word to him during his speedy excursion up and down George’s Street, but then, there was hardly anybody about this afternoon.

Pleasant. You can’t argue with that. But for some, it isn’t enough.

O’Connell, who operates a “sustainable fashion business” on the alarmingly rundown street, has taken him to meet Liam Dodd, who runs the Good Causeway charity shop across the way from her Zip Yard clothing alterations boutique.

The two men have a good chat. Liam brings up the pension age question, which is a hot election issue all over the country, household charges and the USC. A local man and a Labour voter all his life, he tells Howlin that O’Connell has the five votes in his household.

O’Connell’s leaflets are by cash points and counters on most of the shops along Upper and Lower George’s street because the young politician, who was elected to the local council for the first time last year, is on a crusade to bring this once-busy vital street back to life.

When a chirpy Howlin moves on, five votes in the bag, Liam ponders on the nature of leadership and tells us why he doesn’t want to see Labour going into a coalition with the outgoing government party.

“I won’t vote for Fine Gael because – I’ll be honest with you – because of Varadkar. Varadkar and [Richard] Bruton stood against [Enda] Kenny before they were in power. They tried to overthrow him, they lost,” he says.

And what about Brendan Howlin? Not really leadership material in Liam’s book.

“Whatisname down in Tipperary – Kelly. Maybe.”

Dodd’s assessment of the current leader is interesting. Pleasant doesn’t cut the mustard in his book.

Back out on the street, Brendan is being Mr Personality for all he’s worth. He has a long discussion with Lisa Mardell of Smart Cookies Montessori School about the lack of funding from government for the early childcare sector which she says is in crisis.

“I’m really impressed by him,” she says afterwards, perusing the leaflet he talked her through.

Despite the shenanigans out at the debate on Thursday night, Howlin seems relaxed and rested. Perhaps this is because he spent most of his morning at the Institute of International and European Affairs, where four party leaders made speeches on Europe and Brexit in the course of a long day.

Short of resorting to pharmaceuticals, there couldn’t be a better way to power down the batteries and enjoy a good snore than an extended visit to an IIEA extravaganza. It’s like a one-day session of the Magill Summer School, on steroids, transplanted in Dublin.

Our reporter Harry McGee reported from the think tank’s two-day election speechifying marathon. On day one, he tweeted a picture of the baldest, greyest, late middle-aged male audience having the most riproaring time. The place was stuffed with diplomats, retired public servants and decommissioned trade union officials hugging themselves in anticipation of the next Q&A session.

The picture was met with a most delicious Twitter reply from Daniel Sullivan: “The people who eat their manifestos in the middle of the day.”

Howlin was able to leave the event at lunchtime and head to Dún Laoghaire to meet Juliet. She is a force of nature. When she got tired of being told the council was going to do something about the boarded-up shops on the street and make moves to revitalise it, she decided the best thing to do was run for office. She was elected at the first attempt.

Her accent is not south Dublin, though.

“Kanturk, Cork,” she says, adding that her home is on the southside now. She has a six-year-old daughter and is struggling to pay the increased creche fees while she is renting a house, the fourth rented house in six years. Juliet doesn’t think she will ever be able to afford to buy her own place. She employs seven people.

Brendan’s candidate has taken to politics with ease. “Sure I’ve been canvassing in the shop 10 hours a day for the last 10 years.”

The view is that O’Connell may fall short on her first outing and just lose out on the last seat. But she is refusing “to waste my energy” worrying about the competition.

“I’m going full steam ahead paddling my own canoe.”

Local newsagent John Hyland has been listening to what customers are saying.

“Not very much, really,” he says. “I am surprised at how negative everyone is, anything I hear is kind of negative. I don’t hear anyone saying anything for the Government. I’m amazed, they’re anti-politicians for some reason. The one thing I never hear around here is ‘We need to vote for a government.’ I mean, they’re all voting for personalities not for governments, that’s my view. And that’s what we need.”

Meanwhile, Brendan lives in hope of being in government once again.

“I’ve been mapping out what a progressive alliance post-election might be able to achieve. I think there will be sufficient deputies from the Labour Party, from the Greens, from the Social Democrats, plus like-minded Independents to have a very important bloc. If we agreed on a policy platform that was non-negotiable, we couldn’t be picked off, one by one, by any other block and we could shape the policy agenda for the next five years. That would be my hope.”