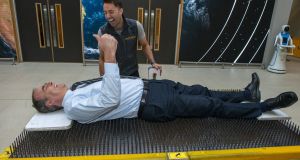 Minister for Education Joe McHugh on a bed of 3,000 nails at Dublin’s Explorium.

If Fine Gael is coming under increasing pressure as the election campaign hots up, the ever-affable Minister for Education Joe McHugh is certainly showing no sign of it. He laid himself down on a bed of 3,000 nails for all to see during electioneering on Monday.

The Donegal man was on a visit to Dublin’s Explorium science centre, when he agreed to scientifically demonstrate the definition of pressure – which, all Irish Times readers will know, equals force divided by the area over which the force is distributed.

Showing no pressure at all, the unflappable McHugh raved: “That is class, class.”

Yes I do and I’ve said that before

– Minister for Health Simon Harris, asked on Today with Seán O’ Rourke if he has private healthcare. So too does Fianna Fáil’s health spokesman Stephen Donnelly

Just when he thought he was doing so well ...

Micheál Martin was brought down a peg or two when he was parachuted into Sligo to spread some high-profile fairy dust on the campaigns of his rank and file in the northwest.

Sidling up to one voter in his easy manner, Fianna Fáil’s leader for almost a decade wondered who she would be voting for come polling day.

Without hesitation, Bridie Gilleece assuredly shot back: “I like Fianna Fáil. ”

Martin must have thought his work done, when Gilleece pulled back to strain a good look at him. “Are you Fianna Fáil?” she squinted.

“I am, yeah,” the puzzled party poster boy insisted. Pausing briefly, as if to think about it, he assured her again: “I mostly certainly am.”

30 – The price, in euro, of a raffle ticket to raise money for election candidate Michael Healy-Rae. Gardaí have questioned whether Healy-Rae has a permit for the raffle, which has a top prize of €1,000.

Fianna Fáil’s Stephen Donnelly gets a ribbing for regularly switching political allegiance but even he briefly forgot his latest role on Monday.

The former Independent, who turned Social Democrat, before turning Independent again, ahead of joining Fianna Fáil, was involved in an on-air ding-dong with his nemesis Simon Harris.

The political foes are both scrapping for a seat in the same constituency of Wicklow.

So much so, that after the pair’s radio spat Donnelly declared in response to a question about consultant pay: “In my two years as health minister ... ”

Returned to reality, he started again: “Um ... in my two years as health spokesman ... ”

There is a new “voice for the farmers” standing up for the rural vote, in, er ... Dublin’s north inner city.

Sarah Louise Mulligan, a Donald Trump-loving, burlesque performing, Marilyn Monroe-impersonating actor and singer, is looking to add a new string to her already many-stringed bow – she wants to be TD.

It’s not her first foray into the the world of elected representation: she was thrown out of a meeting of South Dublin County Council in 2018 over a row with a councillor while pitching for their nomination to be president of Ireland.

Now that the Áras is booked out for another few years, Mulligan is making sheep’s eyes at Leinster House. She is asking the voters of Dublin Central – perhaps as urban a constituency as you can get in Ireland – to elect her as their representative.

In a 21-point election pledge, she vows, among other eclectic causes, to be a “voice for the farmers”. Mulligan also deems climate change a hoax, denounces mainstream media as biased and believes Ireland should leave the EU and close its borders.