Taoiseach Leo Varadkar has insisted a spoof election video, released by Fine Gael and later deleted, was making a “serious point in a comical way”. 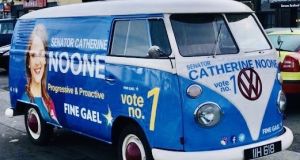 Senator Catherine Noone has been forced into an embarrassing U-turn after irking voters with her newly-unveiled vintage campaign van.

The Fine Gael candidate was boasting the “great addition” to her team – a brightly coloured 1967 split-screen Volkswagen, emblazoned with a picture of the would-be TD alongside her “progressive and proactive” slogan.

But the eagle-eyed electorate wasn’t long in noticing it was parked up on the pavement in Killester, in the Dublin Bay North constituency, where she is running.

Several people took her to task over the obstruction. In what she later admitted was a “knee-jerk reaction” she suggested one upset voter should “get a grip”.

A number of others weighed in with complaints on behalf of wheelchair users and the visually impaired, drawing a more considered and contrite response.

“I’m sorry,” she relented. “I genuinely didn’t realise it was parked on a footpath, I wasn’t there at the time, the photo was sent to me. I know it’s my responsibility. I realise now it very obviously was. I’ll make sure it doesn’t happen again. And I’ll try to improve parking there.”

Tánaiste refuses to linger for fear of losing votes

As Minister for Foreign Affairs, Simon Coveney is boss to the country’s diplomats. And it was diplomacy he was reaching for on the campaign trail in Limerick, when pressed about his favourite band.

Following Leo Varadkar’s rendition of Zombie by The Cranberries with a busker during the European elections last May, Limerick voters wanted to know if Corkonian Coveney was also a fan of the Treaty City’s celebrated band.

But the Tánaiste didn’t linger and laughed off the questions as he made his way to Thomond Park for the Munster v Ospreys clash. “Listen, I’m trying to win votes here, not lose them,” he remarked.

39 – The percentage of voters who believe either Varadkar or Micheál Martin are competent to lead the country, according to a “nationally representative” poll of 1,000 people pitching the two leaders against each other, carried out by communications agency PR360.

A stretch too far

Politicians can go to great lengths to get publicity. But posing in front of limousine proved a stretch too far for Fianna Fáil’s Kevin O’Keeffe.

The outgoing Cork East TD eyed a photo opportunity when he pulled into a filling station in the early hours of Sunday morning.

Across the forecourt was a glimmering Hollywood-style silver limousine, replete with blacked out windows.

O’Keeffe approached the chauffeur and asked if he could plaster his campaign poster on the side of the car, and strike a pose stepping out of the driver’s seat.

Photo taken, it was posted to Twitter and Instagram along with the quip: “After long day needed top up #AnIrelandForAll”.

But social media can be an unforgiving arena, and it wasn’t long before the light-hearted stunt backfired – many assuming it was his official campaign car.

“Brings back memories of the Fianna Fáil ministers arriving at Farmleigh House in their state mercs, after the IMF had arrived in Dublin, and the country had gone bust!,” raged one.

“Tone deaf”, said another, while one Twitter user said: “They get more and more out of touch each election.”

O’Keeffe deleted the tweet, insisting it was a just a joke.

Fianna Fáil wasn’t the only party scrambling for the delete button on Twitter over the weekend.

Strategists at Fine Gael HQ thought it would be great jape to dress up as their electoral foes and run around central Dublin in a frantic hunt for “policies”.

The 54-second video of the mocked up search was set to the theme tune of The Benny Hill Show, Yakety Sax.

But within 12 hours of its being uploaded to social media, Fine Gael spin doctors pulled the video amid a backlash online.

One Fine Gael member said it was an “embarrassment”, another voter told the party to “focus on politics and not creating cringe videos”, while others thought it inappropriate at the end of a week of violent deaths.

Varadkar said it was taken down because “some people thought it was silly and we want to make the same point perhaps in a more serious way”.