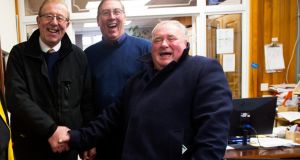 Shuffling through a canvass on a mild morning in Roscommon, outgoing Fianna Fáil TD Eugene Murphy is beckoned towards an SUV by a woman seeking to wish him well.

Murphy, the only Fianna Fáil deputy for Roscommon-Galway in the 32nd Dáil, leans in through the window for chat, as the vehicle pulls over near the Roscommon Arts Centre on the outskirts of the town.

The woman declines to give her name to The Irish Times but Murphy afterwards relays the gist of the conversation with a knowing and satisfied nod.

He is referencing the last-minute addition by the party hierarchy of Orla Leyden, a local councillor and daughter of Fianna Fáil Senator and former minister Terry Leyden, to the Fianna Fáil ticket in the tight, three-seat constituency.

Murphy is well known around Leinster House for his sunny demeanour and endearingly high-pitched voice but his mood at the outset of Election 2020 is far from his trademark bubble and squeak.

But he has a more electorally potent weapon – sympathy – and is not afraid to use it. Few things in politics play better than a perceived shaft from them up above in headquarters.

“You know I am under a bit of pressure,” he says quietly to voters as he goes about his business. “Things happen in politics, but nobody would stand for Fianna Fáil in 2016. I am not some super sub.”

In Casey’s filling station – a huge plaza that includes a Londis, a coffee shop, Supermac’s and much else besides – he pushes the sympathy card hard.

May Feeney from Ballymacurley, who has been working in Casey’s for 14 years, doesn’t think Murphy has much to worry about. “I think he’ll make it,” she says. “He’s a nice fella.” Feeney, like other voters on the canvass, says the future of Roscommon Hospital is the number one issue locally.

“I’d say the hospital is the biggest issue of the lot, to get more beds from the way it is.”

Seán Fitzmaurice (65) and from Ballygar in Galway is a Fianna Fáil supporter but declines to say if he will vote for Murphy or Leyden.

“Well, I have to make up my mind on that,” he says. “I am not going to tell you.” Fitzmaurice raises the increase in the age at which people become eligible for the State pension, an issue that has featured heavily in the campaign to date.

“I think I should get my pension if I wanted to go. I am not saying I am going. That’s a mistake that should be reversed. Fianna Fáil said they’d do it, but I don’t hear them talking about it.”

It is clear Murphy feels bruised by the addition of Leyden, and argues that she initially withdrew from the selection convention for the general election. He faced a similar situation at the 2016 election, when former Roscommon goalkeeper Shane “Cake” Curran was added by party HQ after Murphy was selected at convention.

Murphy takes a call from a local party organiser as he drives back to his constituency office and they discuss the design of election literature.

“It goes on alphabetical order,” Murphy says reassuringly to himself, as it becomes apparent that Leyden’s name is set to come first on the Fianna Fáil constituency flyers.

Micheál Martin visited Lanesborough in the neighbouring Longford-Westmeath constituency the previous evening, just near Murphy’s Strokestown home. The fact that Leyden was photographed shaking the party leader’s hand – even making it on to RTÉ’s evening news – is recounted with a shake of the head.

“I won’t comment,” Murphy says when asked if he has made his displeasure known at Leyden’s addition known to Martin. “Look it, the decision has been made.”

Supporting Martin’s call to enter into a confidence-and-supply agreement with Fine Gael wasn’t easy, he adds.

“I have quietly said to myself, does any loyalty exist nowadays. That’s all I’ll say. Politics can be a strange business.”

Yet a hint of defiance enters his voice at the prospect of a directive from party headquarters ordering a carve-up of territory between the two candidates.

“I have made it quite clear I am not going to agree to any divide. There has been no official communication in terms of a divide but even if it comes I won’t be doing it.”

He says there is a risk the party could lose its seat in Roscommon-Galway, although most predict Murphy, along with outgoing Independents Michael Fitzmaurice and Denis Naughten, will be returned.

“If it is a Fianna Fáil-led government, which I believe it will be under Micheál Martin, and we don’t have government representation in this constituency, it is bad news.”

And if the party does win two seats, Murphy puts Martin on a bit of notice.

“There’ll be nobody happier and I’ll be knocking on the door of Micheál to get some ministerial representation for the area.”

1 DUP pleads with UK to reduce salary threshold for migrant workers coming to North
2 ‘If all the immigrants go back, who will work in the meat factories and do the crap jobs?’
3 Jewish council dismayed at Sinn Féin TD’s ‘unacceptable’ tweets
4 A Russian cruiser with ‘cannibal rats’: What other ‘ghost ships’ could be out there?
5 Person claiming to represent ‘ghost ship’ owner comes forward
Real news has value SUBSCRIBE