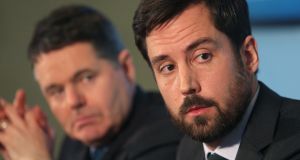 Minister for Housing Eoghan Murphy said he would like to remain in the role after the general election. Photograph: Damien Eagers

The rights of social housing tenants to buy their homes will be restricted if Fine Gael is returned to Government, the party has confirmed.

Speaking at a pre-election briefing on the party’s housing plans Minister of State for housing Damien English said Fine Gael would “protect the right of social housing tenants to buy their own home” but that “changes to the system are needed”.

The current scheme introduced by the Government in 2016, offered discounts based not on the longevity of the tenancy but on the income of the tenant. Tenants earning a minimum of €15,000 could get a discount of up to 60 per cent on the market value of the house. They could also buy their house after one year of tenancy.

This system would be “reformed”, Mr English said, by reducing the discount to 25 per cent of market value, “thereby protecting the taxpayers’ investment in social housing by making sure we have enough money to replace that house”.

A minimum tenancy of 10 years would be required before the house could be purchased he said.

“Currently, someone can buy their house after one year, we don’t believe it makes sense. It’s not the best use of housing stock so we are going to bring it back to what it used to be, which is a 10-year requirement.”

However, he said the minimum income requirement could be waived at the discretion of the council chief executive, to allow retired people, or others who could prove they could afford to buy their house despite not having an income, to avail of the scheme. Tenants of “Part V” housing – homes which are bought by the council from developers of private estates – will also be able to avail of the tenant purchase scheme for the first time.

Applicants will also be able to apply for the Rebuilding Ireland home loan to pay for their house.

Mr Murphy said he wanted to stay as Minister for Housing after the election.

1 Coronavirus: What we know so far about how Ireland is affected
2 Mass gatherings due to go ahead in Ireland amid coronavirus outbreak
3 Stormont finance minister told at Sinn Féin rally he has nothing to apologise for
4 Cancellations and confusion as coronavirus threat edges closer
5 Coronavirus: Ireland plans for massive increase in tests
Real news has value SUBSCRIBE