An Taoiseach Leo Varadkar answers some of the most googled questions about him as part of a Fine Gael video ahead of the general election. Video: Fine Gael 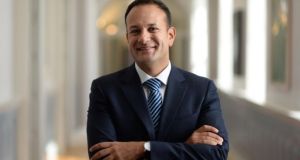 The video, which lasts for just under two minutes, features the Taoiseach seated on what might be a bar stool in what looks like heaven’s waiting room answering questions. Photograph: Dara Mac Dónaill

If the Taoiseach Leo Varadkar or his handlers hoped the video just released – or dropped – on Twitter in which he answers what he says are the most frequently googled questions about himself, would be greeted warmly by keyboard warriors then they have clearly not spent enough time on the social media platform.

The video, which lasts for just under two minutes, features the Taoiseach seated on what might be a bar stool in what looks like heaven’s waiting room answering questions.

But this is no Seán O’Rourke interview and challenging questions are nowhere to be seen.

First up is a question about where Leo is from. Answer. Castleknock “but not from the expensive end”.

He also makes it clear that he doesn’t live in Dublin 4 “even though a lot of people think I do”.

Then he tells us how many siblings he has – two – and he shares the fact that he is the youngest and the only boy in his family admitting that he “got all the attention growing up” as a result.

Probably the best and most illuminating question is next.

He looks stumped for a second, almost as if someone had just asked him if he had ever taken drugs. “Uh, I am the Taoiseach,” he answers. “Hopefully still the Taoiseach in a few weeks’ time,” he clarifies and follows up with a nervous laugh.

No, no he is not. And his partner Matt might want to put any plans he may have for a romantic Valentine’s Day proposal on ice as the Taoiseach stresses that he has “no plans to get married at this stage”.

He explains that he is not a vegetarian. “I love my meat and fish and chicken. So I guess I am an omnivore.”

He likes his steak pink but not bloody, speaks English (and a bit of French and German) and while he is a medical doctor he no longer on the register any more so “can’t prescribe any drugs or write you any sick notes”.

All of this not entirely illuminating information is delivered to a backtrack of jolly elevator music after which he gets to the meat of the matter and urges people to vote for Fine Gael, a party, he says, which “can give you and everyone else a future to look forward to”.

Not well, to be honest.

Several people drew comparisons to a similar video released by Boris Johnson recently and wondered why, if the Taoiseach would steal an idea from anyone, he would chose to steal it from the British prime minister.

“I did Google “narcissist” and you fit the bill, without question,” one poster said unkindly.

Another person demanded to know what it was that “prevents you having zero empathy towards the day to day struggles of the ordinary citizens of this country?”

Mind you, the Taoiseach can take comfort from the fact that Twitter is rarely a place where people say nice things about anyone – particularly politicians – and his tweet was liked 300 times and retweeted 75 times in the first 90 minutes or so, so that wasn’t too bad.

Covid-19: About 1,500 fines issued for non-essential travel over past two weeks 18:12
Councillor takes High Court action over selection process for development board 17:55
Prominent Dublin councillor resigns from Green Party 17:43
Hitman to be sentenced for shooting drug cartel target next month 17:42
Shoppers spent more on Christmas 2020 than in previous year 17:36