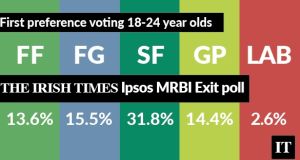 Data from the Ipsos MRBI exit poll commissioned by the Irish Times, RTÉ and UCD. 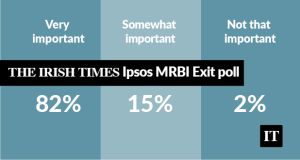 How important was the ability to manage the economy to how you voted today? 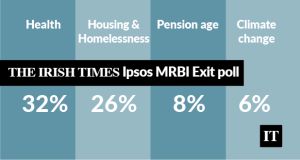 Which one of these was most important to you in deciding how to vote today? 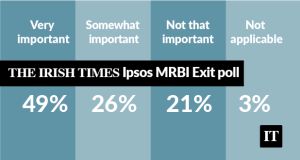 How important was the party leader to how you voted today? 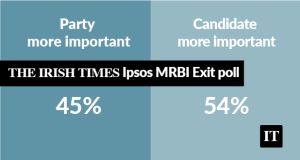 Which was more important to you when voting today - the candidate or the party?

It is clear from the exit poll that the surge of support for Sinn Féin among younger voters turned the election into a three-way contest – the first time this has happened in the history of the state.

1 ‘I woke up the next day in a guy’s house covered in bruises’
2 Coronavirus: What we know so far about how Ireland is affected
3 Coronavirus: Ireland plans for massive increase in tests
4 Woman (38) appears in court charged with murder of Garreth Kelly
5 What is coronavirus and what should I do if I have symptoms?
6 Sinn Féin’s problem with names much more than mere wordplay
7 Dublin stabbing: Parking space was at centre of previous rows, gardaí told
8 Couple challenge decision over access to Killarney lake
9 Miriam Lord: Lady Lou crowned the People’s Taoiseach at Liberty Hall
10 State would need 16 fighter jets for full air defence capability, expert says
11 Woman convicted of disguising herself to conceal murder
12 Soreness is good, scales are pointless: The 10 biggest myths in fitness
13 Coronavirus: Irish holding back on holiday plans
14 Róisín Ingle: How Taylor Swift helped me navigate the puzzle of parenthood
15 Coronavirus: British government calls for calm after eight schools closed
16 Gerry Thornley: IRFU facing logistical issues rescheduling Six Nations games
17 Woman was murdered by husband in staged boating ‘accident’, court told
18 SF criticise delay as next bid to elect taoiseach unlikely until late March
19 Garda Commissioner ‘stands over’ IRA-Sinn Féin remarks
20 Wealthy investors’ legal challenge against Revenue fails
21 Tax burden on Irish households among lowest in EU
22 ‘Black Americans and Irish have a lot in common. I feel we’re connected’
23 Dublin nightclub drops entry fee and asks for charity donation instead
24 Duffy says she was ‘raped, drugged and held captive’
25 Oil barrels removed from ‘ghost ship’ stranded on Cork coast
26 Irish in Italy on coronavirus: ‘The city is in a bit of panic – the streets are empty’
27 Gordon D’Arcy: Change has to happen before Ireland's trip to Paris
28 Coronavirus: Ireland-Italy match is called off, IRFU confirms
29 Army reservists not fit enough for exercises, says general
30 Schools face losing hundreds of teaching posts due to dispute
31 Irish Rail may have to suspend Sligo line services due to floods
32 Man who contracted polio at rugby match says he understands cancellation
33 Pine marten helping red squirrel population rebound, study shows
34 Paraic O’Donnell: MS is meticulously destroying me. I am being unmade
35 Ireland still facilitating multinational tax avoidance, commission says
36 Sister of victim told brother-in-law ‘we forgive you’, murder trial told
37 Claim that IRA controls Sinn Féin ‘based on hearsay’, says Ó Cuív
38 Head of key State transport body to step down
39 UK to reject EU’s ‘level-playing field’ demand in negotiating paper
40 Solar panels: Are they worth the investment?
Real news has value SUBSCRIBE