Analysis: On the basis of the latest poll, there is no obvious path to a stable government 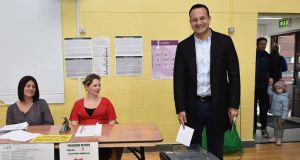 If the figures of tonight’s exit poll are borne out when the ballot boxes open, the result of Election 2020 will be an unprecedented even split between what are now the three main forces of Irish politics.

In an astonishing result, the exit poll – carried out by Ipsos MRBI and commissioned jointly by The Irish Times, RTÉ, TG4 and University College Dublin – predicts that Fine Gael, Fianna Fáil and Sinn Féin will win roughly 22 per cent of first preference votes each.

That Mary Lou McDonald and Sinn Féin have achieved a stunning result that will reshape the political landscape is clear. How the 33rd Dáil will elect a government is decidedly less so.

A majority government in the next Dáil needs the support of 80 TDs. On these poll results, all parties are a long way off that figure.

McDonald only stood 42 candidates across 39 constituencies, meaning she is extremely unlikely to be in a position to lead a coalition. There are two likely routes to government, if these figures carry into the final results.

One is a confidence and supply arrangement similar to that agreed between Fine Gael and Fianna Fáil in the last Dáil, with either Micheál Martin or Leo Varadkar heading a minority coalition, underpinned from Opposition by the other, with smaller parties and Independents. The second potential outcome, a government with a clear majority, would require either Martin or Varadkar to do a U-turn on what they said during the campaign.

Yet the tightness of the result outlined in the exit poll means no definite predictions or forecasts can be made.

In pictures: Ireland goes to the polls VIEW NOW

The precise findings put Fianna Fáil on 22.2 per cent, Fine Gael on 22.4 per cent and Sinn Féin on 22.3 per cent. The poll’s margin of error is 1.3 per cent and the closeness of the findings mean the three parties could leapfrog or fall behind each other as counts progress over the coming days.

But they indicate that Fianna Fáil is stuck and has not grown since the last general election. Its recovery has regressed and it is clear that vast sections of the electorate have not forgiven Micheál Martin’s party for its role in the economic crash of a decade ago.

Furthermore, entering into a confidence and supply agreement allowed McDonald to tie Fianna Fáil and Fine Gael together to devastating effect as two sides to the same government coin.

Fianna Fáil has not, as it had hoped, pulled significantly away from the pack in the final few days. The party has always insisted, however, that it is underestimated in opinion and exit polls and that may well be the case once more.

It will believe that its support will rise as counts progress and put it in a position to win the most Dáil seats and lead a minority government, but Martin may face more calls from within his party to do a deal with Sinn Féin.

Fine Gael will be relieved that it has gained support in the final week of the campaign and, if these figures are replicated in the final outcome, should see the party avoid a 2002 style meltdown and doomsday predictions of a seat haul in the early 30s.

Fine Gael figures said privately in recent days that their relentlessly negative campaigning, while unpleasant, had been effective in capping Fianna Fáil and stopping Martin’s party from galloping away from the pack. It seems that strategy has worked.

Fianna Fáil and Fine Gael are now in a contest to see who can win the most Dáil seats, but neither is likely to breach the 50 seat mark. In the early 1980s, they could command the support of 85 per cent of voters. The exit poll predicts that at this election it will only be 44 per cent.

The wave of support for Sinn Féin surprised McDonald and her party as much as it surprised everyone else.

Sinn Féin’s decision to run 42 candidates across 39 constituencies meant it was not in a position to capitalise on its wildly successful campaign. Senior party figures insist they want to be in power and will justifiably argue that, on these figures, they have as much right to be in government as Fine Gael or Fianna Fáil.

But even if it is left outside Government Buildings, Sinn Féin will not fear another election in the coming months if there is to be one.

It will not make the same mistake of running too few candidates again and many in the party would likely relish the chance to go to the country once more and pick up seats they left behind this time.

The Green Party, on 7.9 per cent, should win around 10 seats and will be the first port of call for any party leader seeking to form a government.

Labour, further back on 4.6 per cent, may want to stay out of coalition entirely although, with the Social Democrats on 3.6 per cent, there is scope for a broad alliance of the left to negotiate participation in coalition, as mooted by Brendan Howlin.

According to the exit poll, Independents are on 14.5 per cent and many will want to enter in government. The problem could be, however, that many non party TDs, having looked on as Shane Ross, Finian McGrath and others took ministerial office, will want the same – a potentially high price for any aspiring Taoiseach.

On the basis of the exit poll, there is no obvious path to a stable government. But what is clear is that Sinn Féin’s rise has fundamentally changed Irish politics.