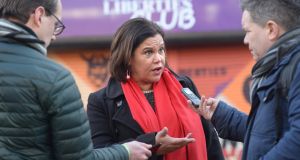 Sinn Féin leader Mary Lou McDonald has said she was “upset” when she heard “vile” comments made by one of her party’s councillors on a podcast.

Tallaght South representative Paddy Holohan, a former MMA fighter, was last week suspended from Sinn Féin after claiming that there were “some f***ing scum women out there”.

During an interview with film-maker Terry McMahon on his podcast, Mr Holohan said he had heard of “loads of” under-age girls pursuing men and later blackmailing them for money. He had previously apologised over remarks he made about how a “family man” should run the country, and for questioning Taoiseach Leo Varadkar’s links to Ireland because of his Indian heritage.

“His comments were vile,” Ms McDonald said during an interview on RTÉ Radio’s Today with Seán O’Rourke programme

“When I saw, when I heard, when I read those comments, to say that I was gobsmacked was an understatement and it’s not that I was angry, I was deeply shocked, I was actually upset by those remarks.”

She said people were free to join Sinn Féin and that Mr Holohan was “hugely popular” and “a very accomplished sportsperson” who applied to be a party member.

“There isn’t a special test that you have to pass, the critical thing here is that when these remarks came to my attention I moved speedily and I asked the organisation to establish the disciplinary process and that’s under way. Those types of comments can’t be made. It’s absolutely unacceptable to make remarks like that about women and girls.”

Sinn Féin was hot on the heels of Fine Gael and Fianna Fáil in the latest Irish Times/Ipsos MRBI poll and Ms McDonald said she wants to lead her party into a government that brings about “real change”.

She said the “days of single party government are long gone” and that she wants to be party of an administration that “serves the needs of the people”.

“Politics is about to change,” she said.

Taoiseach Leo Varadkar and Fianna Fáil leader Micheál Martin will on Wednesday night participate in a debate on Virgin Media TV which Ms McDonald has argued that she should not be excluded from.

She denied that she was being coy in her response to questions on if she wants to be taoiseach.

“I wish to be in a government that leads to real change,” she said. “Whichever person that leads the majority will lead the government. That could be me. That decision rests entirely in the hands of the people.”

Ms McDonald said that the parties that wish to exclude Sinn Féin “want it all their own way”.

“They want to squeeze out alternative politics. Some have said that we’re not fit for government. The team that we have is more than fit, that’s why they want us out.”

Added Time: this rugby outrage is out of control and can Galway go all the way?