Brexit: Toyota warns its UK plants in jeopardy under no-deal 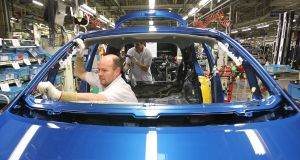 Toyota has warned a no-deal Brexit, in which a 10 per cent tariff on exports under World Trade Organisation (WTO) terms apply, would put its future UK manufacturing operations in doubt. A senior executive also warned that any prolonged disruption at the ports “would inevitably lead to a production stop, probably within days”.

In a strongly worded warning, Matthew Harrison, executive vice president of sales at Toyota Motor Europe told The Irish Times: “If you have a manufacturing plant that’s sending 95 per cent of its output volume into continental Europe, if you are forced to cope with 10 per cent tariffs, we’re not really in a position to pass that on to an end customer because of the competitiveness of the market. It would be extremely difficult for us to have a competitive, sustainable business operation.”

Toyota has two manufacturing facilities in Britain, a vehicle manufacturing plant in Burnaston, Derbyshire producing the current Corolla hatchback and estate, and an engine plant in Deeside, Wales. The UK manufacturing operation employs over 3,800 workers directly.

Mr Harrison, who was previously managing director and president of Toyota UK, said that in the case of a hard Brexit and disruption at ports, the company has a stock of inventory to keep the vehicle production plant in operation “for a few days after October 31st. “But to be perfectly frank, it can’t be more than a few days because we have something like 50-plus (delivery) vehicles coming continental Europe every day and we operate a just-in-time delivery system and we don’t have the warehousing capability or the sequencing capability to stop parts production. We’ve done what we can but if there was a prolonged disruption it would inevitably lead to a production stop, probably within days,” he said.

“We’re focussed on doing everything we can to be cost competitive when it’s within our control, but I think it would be really a very difficult situation for us to face. Our lobbying to the UK government from day one has been that we really need a free trade and tariff-free environment to be competitive over the long term.

“If it’s a question of a short period of time, until a free trade agreement is in place, then there is always the possibility to cope for a period of time. But it doesn’t really bare thinking about, a future where we could be confident about being competitive out of the UK if we were facing tariffs and 10 per cent duties.”

Mr Harrison’s comments follow those earlier this week by Gianluca de Ficchy, the chairman of Nissan Europe, who said the imposition WTO tariffs would threaten the future of its large Sunderland plant.

The Japanese carmaker, which supports 30,000 jobs in Britain, said it could not guarantee the new Qashqai model would come to Sunderland given the uncertainty surrounding Brexit. The carmaker, which employs 6,000 people at Sunderland and supports another 24,000 jobs in the supply chain, had previously made only measured statements about the impact of the UK’s departure from the EU.

1 Ryanair and Eir the worst for customer service during Covid crisis
2 Fair deal? Family at odds with hospital and each other not so sure
3 ‘Essential’ retailers risk a firestorm if they exploit the closure of the ‘non-essential’
4 Irish elearning company LearnUpon closes €47.4 million investment
5 PlanNet21 eyes further acquisitions after buying rival eCom
6 Economists warn that GDP will fall again over Level 5 restrictions
7 Aldi to impose limits as Christmas toys go on sale
8 What to consider if older person or loved one needs care at home
9 Cabinet to agree on implementing EU travel plan
10 Tinnitus group Neuromod raises €10.5m for expansion
Real news has value SUBSCRIBE