Brexit: All eyes on Brussels as Johnson and Varadkar move closer to ‘possible deal’

Taoiseach Leo Varadkar and British prime minister Boris Johnson have said they “can see a pathway to a possible deal” on Brexit following a meeting in England. Video: Reuters 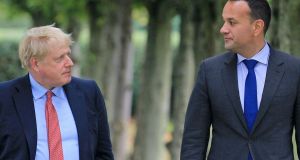 While sources in Dublin and Brussels believed the British would move towards a Northern Ireland-only version of the customs partnership previously proposed by Theresa May, there is likely to be scepticism in the EU about whether the details can be worked out in a short period of time and whether such a scheme would be accepted by the House of Commons.

However, the EU has previously indicated that it could be open to the idea of a reduced version of the “customs partnership” proposed by Theresa May previously. It would mean that while the North would leave the EU customs union with the rest of the UK, it would agree to apply EU customs rules and tariffs on goods entering the North, ensuring the correct duties paid on those intended for the EU single market.

Coupled with applying some single-market rules in the North – already suggested by London – it would mean there would be no need for checks at the Border. Any customs checks could be carried out on goods travelling between the UK and the North where there will already be regulatory checks on goods and food under existing UK proposals, to which the DUP have assented.

Dublin stresses that the negotiations can only take place between the EU and the UK. But the EU would not agree to any new deal without Dublin’s assent. Irish officials briefed the European Commission after the meeting on Thursday.

There was surprise in Dublin and London when an agreed statement released by both governments after the meeting indicated “a pathway towards a possible deal”. Both sides had previously downplayed prospects of a breakthrough, but after a three-hour meeting it was clear a step change in mood had occurred.

He indicated that the Government’s red lines would remain intact after a deal.

“It remains our position that there cannot be a hard border between North and South. And we must continue to have a situation whereby the all-island economy can continue to deepen and function well,” said Mr Varadkar.

Later, in Dublin, Minister for Foreign Affairs Simon Coveney said: “Today was a positive day. I do believe it is possible now to get a deal before the end of October.”