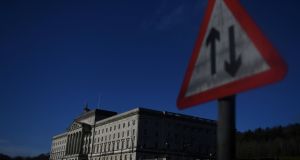 The British and Irish governments are unsure whether this DUP anxiety over the Irish language could jeopardise the prospective agreement. Photograph: Clodagh Kilcoyne/Reuters

Sinn Féin has urged the DUP to ignore those unionists who want to scupper a deal to restore the Northern Executive and Assembly after Arlene Foster said her party would not sign up to an Irish language act.

Comments about proposed Irish language legislation by the DUP leader have caused concern in London and Dublin and raised questions about whether the expected imminent deal to reinstate the powersharing institutions can be concluded.

Ms Foster said that reports about legislation addressing issues such as language were “not grounded in any sort of reality”.

“There won’t be a stand-alone Irish language act,” she said. “We have always made that very clear. People aren’t going to be forced to learn Irish, there isn’t going to be Irish compulsory in schools, there’s not going to be bilingual signs or quotas in the civil service,” she added.

And while Sinn Féin has insisted that one way or another the talks must end this week, Ms Foster spoke of more protracted engagement.

This is at odds with Sinn Féin sources saying they had a firm understanding that they already had essentially signed off on a deal with the DUP to bring back Stormont and that, apart from some minor details, all contentious issues had been settled.

This, it is understood, was designed to allow differences of interpretation so that Sinn Féin could state it had achieved its demand of a free-standing Irish language act while the DUP could contend that Irish language matters were part of inter-connected legislation also addressing Ulster Scots and cultural issues.

But it appears that some grassroots unionist suspicions and fears about an Irish language act, fuelled by politicians such as Traditional Unionist Voice leader Jim Allister, have caused Ms Foster to become nervous about signing off on the deal.

One senior DUP source confirmed that some initial “spooked” unionist reaction to the reports about the Irish language element of the proposed agreement had caused concern within the DUP leadership.

“We had one person coming to us who had got a grant for improvements to an Orange hall. He feared that to get the grant he now would have to have the name of the hall in Irish. That is the sort of thing we have to deal with,” he said.

The British and Irish governments are unsure whether this DUP anxiety over the Irish language could jeopardise the prospective agreement, or whether in the coming days Ms Foster will be able to provide sufficient assurance to her base and any nervous Assembly members and MPs to allow her press ahead with the deal.

‘Essential to any deal’

As talks between the two parties continued at Stormont Sinn Féin senior negotiator Conor Murphy was adamant “that an Irish language act was essential to any deal to restore the political institutions”.

And referring to those unionists seeking to unnerve Ms Foster and the DUP leadership over an Irish language act, Mr Murphy added: “This is a time for leadership and calm heads and there is a responsibility on all involved not to react to some of the noise from people who simply don’t want an agreement.

“The DUP need to make up their mind up about whether they are up for a deal or not.”

The Sinn Féin president Mary Lou McDonald also said the DUP must make up its mind on a deal. “I am concerned that the leader of the DUP felt moved to come out and talk back to some of the very unhelpful outside noise at this time,” she told RTÉ.