Jim Daly will support repeal of the Eighth Amendment 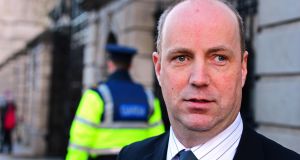 Minister of State at the Department of Health Jim Daly who will support repealing the Eighth Amendment. Photograph: The Irish Times

Minister of State at the Department of Health Jim Daly has confirmed he will support repealing the Eighth Amendment and allowing for access to terminations up to 12 weeks of pregnancy.

Mr Daly said the current system poses a clear and present danger to tens of thousands of Irish women and one, he says, cannot be ignored by politicians.

The Fine Gael TD said abortions are a reality for women in Ireland but one they are forced to deal with it in secrecy, without support from the State.

In a statement Mr Daly added: “These are our partners, spouses, daughters, nieces and friends. I would urge every citizen to consider the issue of abortion arising within the four walls of their own family home, what law would you like to be in place to help your sister, daughter or loved one.”

The Minister of State is one of a number of high profile Fine Gael figures to adopt such a stance.

In his statement Mr Daly appeared to criticise Tánaiste Simon Coveney for his stance on abortion.

Mr Coveney has stated he favours repealing the Eighth Amendment but does not support the proposition to allow for terminations on request up to 12 weeks of pregnancy.

Mr Coveney favours abortions in cases of rape and when a mother’s life is at risk.

In his statement Mr Daly said simply calling for repeal and “abandoning the issue of what sort of a regime we create is not leadership”.

“It is soft politics which fails to deal with the consequences of our acts.”

He added: “Success in Irish politics, too often, has been defined by the capacity to disappear when a difficult issue approaches you in the corridor.

“That politics of turning the blind eye and of nod and wink has been the ruination of the country. We need politics with a spine not a soft underbelly. Abortion is not a perfect solution, and no-one chooses abortion easily.”

Mr Daly also confirmed he believes women should not be criminalised when they access an abortion.

While the Cabinet is united on the proposition to remove Article 40.3.3 of the Constitution, Ministers and Ministers of State are divided on what legislation should replace it.

Nine Cabinet members, including Mr Varadkar, support allowing for terminations on request up to 12 weeks.

Others, including Tánaiste Simon Coveney, Minister for Agriculture Michael Creed and Minister for Communications Denis Naughten, have expressed concern about the 12-week measure.

The Cabinet will discuss this matter on February 28th, ahead of the publication of the Referendum Bill on March 6th.