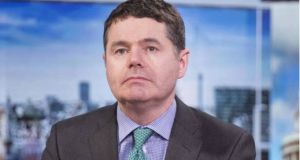 Minister for Finance Paschal Donohoe: he is to hold special bilateral meetings with Ministers running big spending departments in an attempt to rein in expenditure

Minister for Finance Paschal Donohoe has given a “stark warning” to Cabinet colleagues about the need to control spending.

He is to hold special bilateral meetings with Ministers running big spending departments in an attempt to rein in expenditure and hold them to their budgets.

There is growing alarm at the centre of Government after Ministers made a series of spending commitments in health and education at recent public service union conferences, according to senior political and official sources.

Senior sources concede there is conflict in Government between the perceived political need to make spending promises in advance of elections, and the requirement to hold firm on budgetary and public pay policy.

There is a widely acknowledged perception among Ministers that spending discipline has loosened in advance of this month’s local and European elections. With a general election hovering in the middle distance, few expect discipline to be tightened in the near future.

Sources cite the expected decision next week by Cabinet to give the go-ahead to the national broadband plan at an estimated cost of €3 billion, but also pointed to a spate of recent announcements at union conferences by Ministers.

They come after the settlement of the recent strike by nurses which will cost at least €50 million over 2019 and 2020. Nurses and midwives on Thursday voted to back the proposals.

Many union leaders believe the nurses’ deal went beyond the limits of the existing public service pay accord due to run until the end of 2020.

There is widespread speculation in industrial relations circles that the Government is talking privately with trade unions about some form of pay review for all public service staff.

Last weekend the Minister for Health suggested there would be a new process to address lower pay rates for hospital consultants appointed after 2012. Medical organisations calculate this could cost €40million.

There is extreme concern within the Department of Finance at the recent trend, but a realisation that Ministers in making such promises may have had “political cover” from the Taoiseach’s office.

It is believed that there is emerging overspending once again in health despite an €850 million increase in funding for this year.

One senior figure said he was concerned at a “breakdown of Cabinet discipline” on spending, while another source said some Ministers were “out of control”.

A recent memo to Government noted spending growth to the end of April was up 3.7 per cent, approximately the same rate as the economy and considerably below the rate of growth in tax revenues. However, the rate of health spending increase was higher, up 5.6 per cent compared to a year ago.

There are already signs that health spending will again exceed its allocated budgets despite the big funding increase this year. It is understood that the health service recorded a deficit of €38.8 million in the first two months of the year.

It comes as the latest exchequer returns on Thursday revealed weaker-than-expected income tax and VAT receipts.

The figures for the four months to the end of April show income tax generated €6.9 billion, which was €173 million or 2.4 per cent below target and out of kilter with the current growth in employment.

The Department of Finance has played down the significance of this, insisting the weakness is due to technical and timing factors rather than a slowdown in the economy.