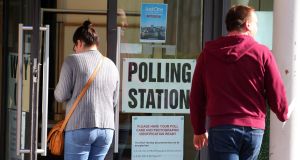 Counting votes is under way at 11 centres in Northern Ireland after the electorate cast their ballots on Thursday in the local government elections.

It is the first opportunity to vote for councillors since 2014, and 819 candidates are competing for 462 seats in 11 council areas.

It is thought the first result will come through on Friday afternoon, with all results expected in by Saturday.

Some 4,000 staff were on hand in the North’s polling stations on Thursday.

The irreverent social media campaign Vote Till You Boke was a feature of the unofficial electoral campaign again this year to encourage people to vote all the way down the ballot paper.

The humorous and simple message had proven to be an easily understood explanation of the proportional representation-single transferable vote system that operates in the North for council elections.

The 11 council areas in the North are: Antrim and Newtownabbey; Ards and North Down Borough; Armagh Banbridge and Craigavon Borough; Belfast City; Causeway Coast and Glens Borough; Derry and Strabane District; Fermanagh and Omagh District; Lisburn and Castlereagh City; Mid and East Antrim Borough; Mid Ulster District; and Newry Mourne and Down District.

They are responsible for a range of matters including but not limited to: waste management; maintaining public parks; monitoring noise pollution; some local economic development powers; birth, death and marriage registry; dog licensing; and running community centres.

In the absence of Stormont, people have been paying more attention to the conduct and practices of local councillors.

A public debate is ongoing in the North about the possibility of extending further powers to local authorities.

At present a councillor’s allowance is £14,200, with further payments to those with other responsibilities such as mayoral roles and chairing committees.