Ireland not getting recognition for tax reforms, says Donohoe 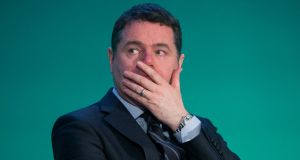 Minister for Finance and Public Expenditure and Reform, Paschal Donohoe: ‘You don’t develop tax policy with reference to particular companies and that is an approach I will continue to maintain.’ Photograph: Gareth Chaney Collins

Minister for Finance Paschal Donohoe has said Ireland is not getting enough recognition in Europe for its tax reform efforts.

In Berlin, Mr Donohoe said he had a productive meeting with his new German counterpart, Olaf Scholz, that focused on Brexit and the future of the euro zone.

“It was a fact-finding meeting for him,” said Mr Donohoe, saying his German counterpart had echoed support of chancellor Angela Merkel for Dublin on its Brexit concerns over the Border.

“I do not believe that Ireland has received recognition for the level of change we have already made,” said Mr Donohoe, warning Ireland would “not be part of any agenda” in the EU to touch tax rates.

He declined to comment on Berlin’s coalition agreement that promises to tackle tax avoidance from name-checked tech companies with EU bases in Ireland: Google, Facebook and Apple.

“You don’t develop tax policy with reference to particular companies and that is an approach I will continue to maintain,” he said.

On the euro reform debate, Mr Donohoe stressed Ireland wanted to finish existing reform projects – including banking union – before rushing ahead with reform projects as flagged by France. That was the main message of a joint letter Mr Donohoe signed with the Dutch and Nordic finance ministers.

What unites the signatories, he said, is they are all “smaller, open economies . . . with a common approach to trade, and when Britain leaves in early 2019 then it is important that we have stronger voices in relation to this issue”.

Mr Donohoe’s new German counterpart has maintained an artful silence to date on the big EU questions, fuelling speculation on how much Wolfgang Schäuble and how much SPD to expect.

He is under close scrutiny by Dr Merkel and her centre-right Christian Democrats (CDU), anxious to preserve the balanced budget legacy left by former minister Mr Schäuble, as well as his own centre-left Social Democrats (SPD) colleagues who are anxious to see more spending and investment in Germany and around Europe.

On Thursday, senior SPD officials conceded that party enthusiasm for the French euro-zone reform agenda – such as a euro finance minister or monetary fund – will be held in check by CDU wariness of anything that could be perceived in Germany as a taxpayer shakedown.

Such CDU concerns have been magnified now that the Eurosceptic, far-right Alternative für Deutschland (AfD) is in the Bundestag.

Another question mark is how Mr Scholz will lean on the EU tax debate over Ireland: Schäuble-style evolution or more robust, SPD-style criticism.

Last November, the SPD refused to back an Irish request to rework its bailout programme, saving the exchequer €150 million in interest payments, until it collected tax the European Commission says is owed to it by Apple.

SPD sources said on Thursday that Mr Scholz, while determined to implement the programme for government, is unlikely to adopt the strident tone on Irish tax of some party colleagues.

“The Germans have an appreciation of the role of small countries in the EU,” he said, “an appreciation I believe has been heightened as people begin to reflect now on what the post-Brexit EU is going to look like.”