Differing fortunes for Government parties as vote fragments in Dublin

FG now largest party in capital, while Labour has gone from 18 seats to just two or three 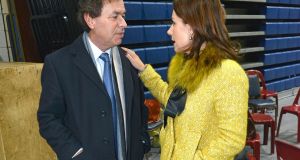 Fine Gael’s performance in the capital marked something of a bright spot for the party as it lost ground elsewhere across the country. It is now the most popular party in Dublin, taking an expected 14 seats out of 44 across the 11 constituencies in city and county.

Labour was the largest party in Dublin in terms of Dáil seats after the 2011 election, with 18 seats, but will return just two, or possibly three, deputies from the capital to the 32nd Dáil.

A number of counts are continuing, such as Dublin Bay North, while recounts have been called in Dublin South-West and Dublin South-Central.

Fianna Fáil made gains in the capital and is expected to take six seats, with an outside chance of a seventh.

It took just one in Dublin at the previous election, but lost it in the Dublin West byelection caused by the death of former minister for finance Brian Lenihan. Sinn Féin also made gains this time out and will take six seats, possibly seven.

Tight vote management saw Fine Gael maximise its support, across south Dublin in particular, and it took two out of four seats in Dublin Bay South, with outgoing TD Eoghan Murphy and running mate Kate O’Connell both getting elected.

Also in Dublin, Fine Gael took two out of an available three seats in Dún Laoghaire, with Mary Mitchell O’Connor and Maria Bailey both successful. This means that the party now holds three out of four seats in the constituency, with outgoing Ceann Comhairle Sean Barrett automatically returned to the Dáil.

Fine Gael also narrowly missed out on two seats in three-seat Dublin Rathdown, where Josepha Madigan was elected but former minister for justice Alan Shatter lost his seat to the Green Party’s Catherine Martin. Ms Martin will be joined in the Dáil by Green Party leader Eamon Ryan, elected for Dublin Bay South.

Fine Gael has called a full recount in Dublin South-West, where Colm Brophy was initially elected but Anne-Marie Dermody lost out to Independent Katherine Zappone for the last seat.

While it did not take two seats in any northside constituencies – with party deputy leader James Reilly losing his seat in Dublin Fingal – Fine Gael gained one in Dublin North-West through Noel Rock and held on to Paschal Donohoe’s Dublin Central seat.

In line with its poor performance across the country, Labour held just two seats in Dublin, with Aodhán Ó Ríordáin fighting for a third in Dublin Bay North.

The AAA-PBP will have more seats than Labour in Dublin, with Paul Murphy in Dublin South-West, Richard Boyd Barrett in Dún Laoghaire, Gino Kenny in Dublin Mid-West and Ruth Coppinger in Dublin West. Ms Smith was initially deemed elected but faces the recount in Dublin South-Central, while John Lyons is also competing for the PBP-AAA in Dublin Bay North.