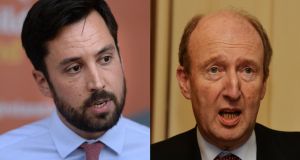 The Department of Housing tried to foist the responsibility for major changes to the short-term rental sector on to the Department of Transport, Tourism and Sport but was rebuffed by Shane Ross’s officials, new documents reveal.

Last month, the Minister for Housing, Eoghan Murphy, announced that short-term lets through websites such as Airbnb will be restricted to the owner’s primary residence and capped at three months a year, while owners of second homes or investment properties will be banned from short-term letting unless they have planning permission.

Documents obtained under the Freedom of Information Act reveal that Mr Murphy’s senior officials tried to make the Department of Transport take responsibility for pushing through the changes, saying that the regulations would “primarily benefit the tourist sector”.

Mr Murphy said last month that the measures were designed to help alleviate the housing crisis.

Senior officials in the Department of Transport rejected the call and said that it would be “inappropriate” for them to take responsibility.

Attempts to charge the Minister of State in the Department of Tourism, Brendan Griffin, with responsibility for the new regulations were also described in correspondence between housing officials as “not an easy sell”.

On August 7th the secretary general of the Department of Housing, John McCarthy, wrote to the secretary general of the Department of Tourism, Graham Doyle:“Taking account of the existing regulatory regime that already exists within the tourism sector and the role that Fáilte Ireland already plays in overseeing key tourist accommodation sectors, it has been proposed by our Ministers that your department and its agencies are the best fit to oversee the development of regulation in this area, which will primarily benefit the tourist sector and facilitate a more managed approach to short-term tourist lettings around the country.”

Mr Doyle responded on August 29th rebuffing the requests. He acknowledged “a regulatory regime exists for specific forms of accommodations within the tourism sector”.

“Given that the main issues requiring detailed consideration fall within the remit of your department, and having raised the matter with Ministers Ross and Griffin, it is appropriate that your department would lead the development of the general approach and undertake the consultation process. The policy expertise, existing legal provisions and the practical known how within your department and its agencies will facilitate a fuller and more expedient consideration of the issues.

“In summary, while it would not be appropriate for this department to lead this important work, we do stand ready to support and be consulted on the tourism-related matters that arise.”

Paul Dunne, an official in the department, wrote to a number of other key officials in the Departments of Housing, Finance and Transport.

“You will no doubt have heard that the Minister intends to move forward on short-term lettings by way of amendment to the planning regulations. The Minister is of the view that while there may be a need for primary legislation that it will take 12-16 months to enact and this is too long a timeframe. There is a need to take shorter-term measures to help alleviate homelessness in parts of the county that are under pressure in relation to available accommodations.”