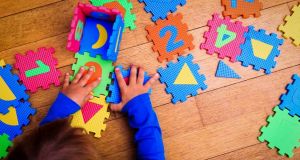 For some families it makes more sense for one parent to opt out of the workforce, Sinn Féin’s Pearse Doherty said. Photograph: iStock

Ireland now has the highest cost of childcare in the world, averaging over €700 a month and like a second mortgage, the Dáil has heard.

Sinn Féin finance spokesman Pearse Doherty said costs were rising by €15 a week but qualified childcare workers were leaving the sector because they could not make a living wage.

He said a childcare sector wage agreement was urgently needed to ensure workers were treated fairly and to maintain high quality care.

“For some families it makes more sense for one parent to opt out of the workforce,” because of the costs of childcare.

This was unfair and he said that in reality it meant that it was women who were being driven out of the workforce.

Mr Doherty added that the childcare sector was now in crisis with many qualified workers being forced to look elsewhere for employment because they could not make a living wage. He said there was an urgent need for a childcare sector wage agreement to ensure fairness for workers and continuity of high-quality care.

Tánaiste Simon Coveney said there had been huge investment by the State in childcare in recent years and from a poor record previously childcare provision had improved.

Mr Coveney said funding for childcare had risen from €265 million to €574million in the last four budgets and 200,000 children were now in subsidised childcare. He conceded that more was required but he said the Government was acting on this and had further planning was underway to develop the sector.

They were speaking afer a new report showed that fees for centre-based childcare have risen for the second year in succession, with the average price of full-time daycare up by 2.2 per cent, or almost €4 a week, according to the largest ever survey of early years services.

The Early Years Sector Profile Report 2017/2018 covers the first year since all families became entitled to some State subsidy when using full-time, registered care for children aged up to six.

The study shows significant variation in the degree to which the new universal payment of up to €20 a week for children aged up to three has been offset by higher fees.

A county-by-county breakdown shows that in Cork city and Co Donegal, full-time fees have increased by up €15 a week. However, in some counties the average fee has dropped, with Co Kildare showing the biggest weekly decrease of almost €7.

Nationally, the average fee for a full-time childcare place has risen €4 to €178 a week. But in the country’s most expensive area, Dublin’s Dún Laoghaire-Rathdown, fees can be as high as €308 a week for one child.