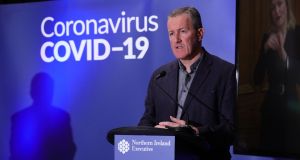 The Department of Health in Dublin has agreed a memorandum of understanding with the North’s power-sharing administration in Stormont, pledging co-operation and collaboration in response to the Covid-19 pandemic.

The memo, which is signed by the chief medical officers in both jurisdictions and was approved by the Cabinet on Tuesday, expresses a willingness to work together on sourcing medical supplies “where it is of mutual benefit to do so”.

However, The Irish Times understands that there are no joint procurement projects underway currently.

The issue of joint procurement has been a sensitive one, with Sinn Féin keen to promote co-operation between the Government in Dublin and the Stormont administration, while unionists are more wary. Last week, the Sinn Fein finance minister in the Northern Executive Conor Murphy said that a joint North-South order for personal protection equipment had been placed with a Chinese supplier, though this was denied in Dublin. Mr Murphy later said that the order had fallen through.

However, the memo signed on Tuesday recognises a “compelling case for strong co-operation, including information-sharing and, where appropriate, a common approach to action in both jurisdictions.”

The document repeatedly references the existing strong co-operation between the two health services on the island, though it emphasises that the agreement “does not create legally binding obligations”.

It says that the two governments will give consideration to the effect in the other jurisdiction of any actions they take to combat the spread of the virus, though it acknowledges that the approach taken in each “may not mirror each other in identical fashion”.

It pledges they will share information on a regular basis, including via a weekly teleconference.

The issue of North-South procurement also was raised in the Northern Assembly on Tuesday when the Ulster Unionist Party leader Steve Aiken referred to how Deputy First Minister Michelle O’Neill “refused to give her full-hearted support” to the North’s UUP health Minister Robin Swann when interviewed on the BBC last Thursday.

In that interview she twice declined the opportunity to say she had confidence in Mr Swann.

Mr Aiken said that was in the context that Mr Murphy last week “informed us that not only was PPE on its way from a joint order with the Irish Republic, but that it was due to arrive shortly in significant quantities”.

Mr Aiken said it transpired that no order was made and there was no detail on an order or on its timing.

Ms O’Neill said she had confidence that “everybody in the Executive is doing everything that they can to save lives”.

Ms O’Neill said Ministers would continue to work together. She added, “If there is a difference of emphasis (between ministers) then that is what we should say. That does not mean we don’t have a unity of purpose, that does not mean that we are not doing everything that we can to make sure we protect lives.”

Northern Ireland public health specialist Dr Gabriel Scally, who had called for a harmonised response between the North and the Republic to the pandemic, described the memorandum on all-island cooperation and collaboration “an excellent framework for real decisive and united action.”

“It is an entirely sensible way forward and it is a great opportunity to unite efforts because I feel very strongly that if the two parts of the island operate in the same way in dealing with the virus it will really multiply the chances of success significantly,” he said.

Dr Scally, author of a report on the CervicalCheck screening controversy, had warned in an opinion article in The Irish Times last week that Ireland’s geographical advantage as an island in the fight against the virus was being “squandered” by different approaches by public health officials north and south of the Border.

“I am delighted the politicians have managed to construct this entirely sensible and reasonable agreement,” he told The Irish Times.

“It has been very disturbing that there has been an attempt to turn it into a more difficult issue than it should be. It is all about perfectly logical measures that are in the interests of everyone living on the island. It is a very significant achievement.”

Dr Scally called for the North and South to agree a common definition on Covid19-related deaths as Northern Irish health officials had not been counting deaths in the community, only deaths in hospitals.

“The figures are not necessarily comparable,” he said.