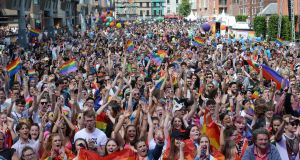 Expunging the criminal records of men convicted of homosexuality will require each case to be looked at individually, Minister for Justice Charlie Flanagan has said.

Mr Flanagan is developing legislation to expunge the criminal records arising from the decriminalisation of homosexuality, the 25th anniversary of which was marked in a State ceremony last month.

Preliminary searches of Garda Pulse records indicate that 150 cases dating from 1944 to 1993 are at issue and require further examination.

Homosexuality was decriminalised in England and Wales in 1967.

“It seems to me that this will have to be on a case-by-case basis and because of this it’s somewhat painstaking, going back over the records,” the Minister said.

Speaking after the Cabinet meeting, Mr Flanagan added that “some of the records going back over the decades are scant”.

The Minister said “gardaí are progressing matters” and he had asked them to review their files and report on the availability and quality of them within three months.

Mr Flanagan, who updated the Cabinet at its final weekly meeting before the summer break, said he had discussed the issue with the Attorney General.

They were “working progressively” towards legislation, which is necessary to expunge the record. “I want it done,” he stressed.

The Minister said he expected to have a further report on the issue in September.

Mr Flanagan formally apologised in the Dáil last month to the victims of anti-homosexual laws, expressing the hope that it would provide some comfort to those still living who he said “felt the hurt and isolation created by those laws, and particularly to those who were criminally convicted by the existence of such laws”.

Last month the State marked the 25th anniversary of the decriminalisation of homosexuality with a reception in Dublin Castle attended by 700 people.

Taoiseach Leo Varadkar announced at the ceremony that work had started on amending legislation to expunge the criminal convictions of gay men prosecuted before homosexuality was decriminalised in 1993.

He acknowledged then that it would take some time but said it would be done.