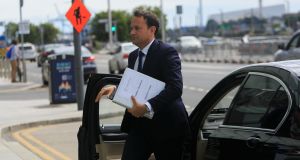 Tánaiste Leo Varadkar arrives at the Convention Centre in Dublin for a Dáil session on Thursday. Photograph: Gareth Chaney/Collins

Tánaiste Leo Varadkar has said continuing the wage subsidy scheme, and commercial rates waiver, until the end of 2020 will be central considerations of its major July stimulus to be announced early next week.

Mr Varadkar has also said he will consider extending the wage subsidy scheme – which is due to come to an end on October 31st – to seasonal workers and others who might not have been on the payroll last February. He also indicated a reboot of the already-operational restart grant for businesses.

He told the Dáil it had been “very beneficial for many businesses” but some other businesses did not qualify who perhaps should have. He also accepted that the grant north of the Border was “more generous than it is here”.

The July stimulus is the Government’s centrepiece policy to try to restoke the economy after four months of near standstill during the coronavirus pandemic. It will be signed off by the Cabinet on Monday and launched on either Tuesday or Wednesday next week.

The Tánaiste also gave a strong indication he will not introduce a voucher scheme for the tourism and hospitality sectors as a stimulus measure. He has said, however, that the multibillion-euro package will include stimulus measures for these sectors which have been amongst the most adversely affected throughout the course of the Covid-19 restrictions.

Sinn Féin had proposals to launch for the July stimulus package and Mr Varadkar told the party’s finance spokesman Pearse Doherty it would be a “very long shopping list”. Mr Varadkar argued that State borrowing needed to be limited to €30 billion in 2020, which was already the biggest deficit in the history of the State.

Both Sinn Féin and Labour published their own July stimulus proposals on Thursday ahead of the Government announcement next week.

Sinn Féin’s enterprise spokeswoman Louise O’Reilly announced a package of measures worth €8.5 billion. It includes the tourism and hospitality voucher of €200 for all adults, and €100 for all children. The cost of the scheme would be €860 million.

The party has also proposed a €1.5 billion scheme that would allot grants of between €12,000 and €25,000 to small and medium enterprises. Ms O’Reilly also proposed a €2 billion back-to-business loan scheme. Businesses could borrow up to €800,000 with zero interest and no repayments for the first 12 months, and low interest rates thereafter.

Sinn Féin has also called for a reduction in VAT to 9 per cent in the tourism and hospitality sector, as well as for the Government to continue waiving commercial rates, and paying the wage subsidy scheme, until the end of 2020.

It has called for stimulus spending of at least €10 billion between 2020 and 2022 with a tripling of spending on training and reskilling, to re-employ people in those sectors where jobs disappeared during the pandemic.

Its proposals include short-term working schemes, a €10 increase in core welfare rates, a 2 per cent cut in VAT rates, investment in State enterprises to create sustainable jobs, and more investment in schools and education to ensure a safe return in September 2020.

“With borrowing costs at record lows, now is the time to invest in our future, restore productive capacity, address our infrastructural deficit, and triple spending on training and reskilling,” said Mr Nash.