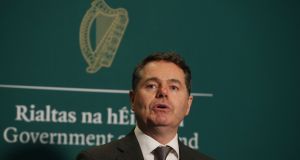 Minister for Finance Paschal Donohoe said there is change coming in EU taxation, and it is going to matter for Ireland. File photograph: Sam Boal/Rollingnews.ie

Minister for Finance Paschal Donohoe has acknowledged that change is coming on taxation affairs in the European Union but he strongly affirmed his view that it is a matter that has to be dealt with by unanimity.

Responding to new plans by the European Commission to tackle “aggressive” taxation and push for decisions on qualified majority Mr Donohoe said in the Dáil that he would carefully study the proposals from Economy Commissioner Paolo Gentiloni.

Mr Donohoe said that Ireland had not yet received “formal communication” on the detail but he said the issue of how “decision-making processes work in relation to taxation” had been pursued previously.

He told Sinn Féin finance spokesman Pearse Doherty “I continue to be of the view that taxation is a matter that has to be dealt with by unanimity but I am aware of ongoing debate on taxation of global companies.”

He added: “There is change coming and it is going to matter for Ireland and we need to ensure that it’s change that it is as fair as possible for Ireland.”

During finance questions in the Dáil when the Apple case ruling was raised Mr Doherty expressed concern that the Commission proposed triggering Article 116 of EU Treaty law which permits a move against member states that distort market competition. “The clear aim of this proposal is to circumvent the principle of unanimity to effect and determine tax policy through qualified majority voting,” he said.

It could seriously affect smaller nations, “undermining the principle of sovereignty”.

He asked if the Minister would use his new role as President of the Eurogroup of Finance Ministers to “ensure that the Commission does not encroach onto national sovereign competitiveness”.

Mr Doherty said “I will be using my role as Minister for Finance for Ireland to pursue what I believe are long-standing clear matters for our national interest. That is what I have done in recent years, it’s what I continue to do.”

The Minister said there had already been a “vast amount of change in our tax code that I know needed to change”.

He said they had made significant changes in corporate tax policy to address concerns “while at the same time protecting the concept that taxation can be part of the competitive model of a small open economy”.

He said the Revenue Commissioners had published updated analysis that showed the effective rate of tax paid by all companies in Ireland is 10.6 per cent. “For the top 10 companies it’s 11.3 per cent, for the top 100 it’s 10.8 per cent.”

He said this tallied with OECD analysis showing Ireland had an effective tax rate of 12 per cent.

The Minister talked of equality of treatment for taxpayers but “if PAYE workers knock on the door of Revenue later today will they also be able to access the 0.0005 per cent tax rate,” Mr Murphy asked.

The Dublin South-West TD said it was “immoral” that Ireland was one of the world’s top 10 tax havens according to a paper produced by the IMF.

The Minister rounded on him and said “the last thing I’m going to take in dealing with this is an undue tone”.

Ireland had a role to play in the way in which large companies are taxed and the way in which we handle a changing economy, “but we do need to ensure that our interests and our jobs are recognised”.