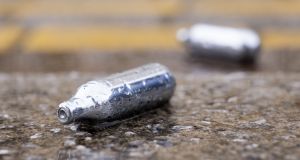 A call has been made for a ban on the use by under-18s of the latest drug “craze”– nitrous oxide or laughing gas – in the wake of deaths in Dublin and Cork.

Fine Gael TD Emer Higgins also called in the Dáil for online sales of the substance to be prohibited as she highlighted the dangers of the drug which has resulted in users in the Netherlands with an average age of 22, becoming paraplegic, and needing to use a wheelchair.

The drug depletes the body’s store of vitamin B12, which can cause spinal cord damage and she said “mild symptoms like a headache, or tingling in the arms and legs, or numbness can be the first steps towards ending up in a wheelchair; or worse”.

She also warned that search engines “should not be profiting at the expense of our children’s health by selling ads encouraging people to buy this product online”. In fact, this product should not be available for purchase online at all.”

Belgium is banning sale of the drug to under-18s and the Netherlands, where substantial evidence on the effects of laughing gas has been gathered, is considering a total ban on its sale.

In the UK 17 deaths had been recorded in the past three years and one in 11 young people there now use laughing gas “which is higher than the proportion of young people who use cocaine or ecstasy”.

Raising the issue in the Dáil the Dublin West TD held up a nitrous oxide cartridge in the Dáil, a “shiny silver bullet”, and said it was shocking how easily available the drug was.

In a statement later she accused search engine Google of “blatantly profiteering by displaying these prominent shopping ads and, by extension, facilitating the abuse of this potentially lethal drug”.

Calling for a public information campaign against the drug, Ms Higgins warned: “We need to act now, while this craze is in its infancy, to prevent our young people from suffering the same consequences as young people in the Netherlands and the UK.”

In an appeal for action she highlighted a website hosted in Ireland selling the capsules under the brand name of “Whip-it!” which offers a 50-pack of whipped-cream capsules, with “bullets” sold for less than €2 each.

The business might appear to be selling the product for legitimate reasons including confectionery but comments by purchasers gave the game away, including remarks such as “works good for whip cream and to trip out”.

Minister of State Frankie Feighan said he was aware of recent media reports about the use of nitrous oxide during the lockdown.

Mr Feighan, who has responsibility for the national drugs strategy, said they needed evidence-information and he confirmed the HSE is gathering information for a report on the prevalence of its use.

The HSE earlier this month added nitrous oxide to the official list of dangerous drugs in the wake of the death of a teenager in Tallaght, Dublin and media reports of a death in Millstreet, Cork.

The Minister said the Department of Health and the HSE operated the drugs.ie website and is providing €100,000 in 2020 to develop a national harm-reduction campaign to raise awareness of the risks associated with drug use, including nitrous oxide.