Analysis: Fianna Fail senses Fine Gael is in no rush to complete talks on forming a coalition 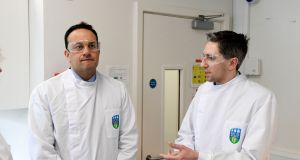 One suggestion is that the current Government be allowed to remain in office until the coronavirus crisis has passed. Photograph: EPA

There was a fascinating line buried deep in the Fine Gael statement about its parliamentary party teleconference meeting this week which was dominated by coronavirus.

In the statement party chairman Martin Heydon said: “Fine Gael will lead the rebuilding of the Irish economy against as the country enters an extremely hard time.”

That was a far cry from after last month’s election when Taoiseach Leo Varadkar said his preference was to lead his party from the opposition benches.

Of course, that was during the BC period (before Covid-19, when everything was different).

Everything has changed since then. Everything. And in many cases the changes will be lasting.

As a result of Covid-19 the business of government-formation has been relegated (rightly) in priority as the Irish State struggles to deal with a threat so enormous it seems at times hard to comphrend.

Fine Gael and Fianna Fáil negotiating teams have been meeting but progress has been glacially slow. When you talk to Fianna Fáil TDs they say there is little urgency on the other side.

They sense that Fine Gael has changed its tune as the crisis has emerged and rediscovered its appetite for government and is not now in any massive hurry to form a new government.

It’s a tricky argument for Fianna Fáil to make because you don’t want to be appear to be nit picking in the face of such a massive threat to the State.

No matter how bitter a pill it is for Fianna Fáil (and Sinn Féin and the Greens for that matter), there is a strong argument being forwarded that Ministers in place now should be allowed say in their respective roles until the crisis has abated.

The likes of Leo Varadkar, Simon Coveney, Simon Harris and Paschal Donohoe have experience, have detailed knowledge of how the system works, and also have corporate memory.

To replace them now with new Ministers - who would need time to read their briefs and get up to speed - would seem counterproductive, at least in the short-term.

As Dr Mike Ryan, the Mayo native who leads the World Health Organisation’s Emergencies Programme has said. “The lessons I’ve learned after so many Ebola outbreaks in my career are, be fast. Have no regrets. You must be the first mover. If you need to be right before you move, you will never win.”

“Perfection is the enemy of the good when it comes to emergency management. Speed trumps perfection. And the problem we have in society at the moment is that everyone is afraid of making a mistake. Everyone is afraid of the consequence of error. But the greatest error is not to move.”

Forming a a new government in the midst of this crisis would lead to delay, no matter how well intentioned.

The Green Party suggested a national government for the duration of the emergency. That was dismissed by other parties but over the past day or two Sinn Féin leader Mary Lou McDonald has indicated it might be worth discussing.

In a nod towards continuity, Green leader Eamon Ryan also said the current key Ministers, Varadkar, Harris and Coveney, would remain in place.

There could also be an argument that Donohoe has the same status. It would a strange government of unity, though, if all the pivotal positions belonged to the outgoing administration.

For the first week after schools were closed, it was apparent everybody had pulled on the green jersey and all decisions taken by government on foot of the quickly-evolving situation passed without criticism.

However, that seems to have changed in recent days and the initial support may dissipate as the crisis endures.

There was more than a tincture of criticism of Government action during the debate on the emergency Covid-19 Bill in the Dáil on Thursday. There has also been other signs that the non-Government parties are reverting to default opposition status on some issues.

Two statements from Fianna Fáil over the past 24 hours have been critical of the Government response in terms of supporting business and jobs.

Party finance spokesman Michael McGrath said it was not doing enough and its response had been “piecemeal, underwhelming and poorly executed”.

The €203 per week allowance for those who have lost their jobs was a particular focus, as it does seem little in comparison with the package proposed by British prime minister Boris Johnson, which will guarantee up to £2,500 sterling per month to employees.

McGrath’s colleague Robert Troy also issued a statement on the same broad theme.”There is no doubt that the scale of our response has been below the average of other developed countries,” he argued.

“Other small open economies such as Switzerland and New Zealand have undertaken fiscal packages of 1.6 per cent and 4 per cent of GDP respectively while Ireland’s measures stand at just 0.7 per cent of our GDP,” he said.

Forming a new government cannot be postponed indefinitely. The Seanad elections at the end of the month will mean that no legislation can be passed until there is a new Taoiseach who is in a position to fulfil their constitutional duty of nominating 11 senators.

Until both Houses are fully functional, no legislation can be passed. And this emergency will demand extreme actions from government before it can pass that will impact severely on the lives of all citizens, especially when the death toll increases (as it is expected to do). In the medium term, that cannot be the responsibility of a caretaker government.

But for the moment, we are in a strange phase, with the Fine Gael-led government still governing as if no general election had taken place. It is in talks with a potential coalition partner who is criticising it in public.

And the other parties are reverting in some ways to their old opposition roles.