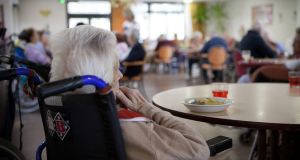 One nursing home in Ireland has to date seen 70 staff members and 19 residents test positive for coronavirus, the Dáil has heard. File photograph: Getty

Almost 100 staff members and residents in one nursing home have tested positive for coronavirus, the Dáil has been told.

Furthermore, members of the cleaning staff and kitchen staff are now absent, Mr Donnelly said, adding there were difficulties in securing agency staff.

“The situation is very, very serious. The nursing homes can’t get the staff that they need. They can’t get their hands on personal protective equipment either. They are getting very, very small amounts and it is not enough. Now I know the HSE is trying to deploy its own staff to try and plug some of these gaps but much more is needed.”

Earlier Minister for Health Simon Harris told the Dáil that addressing issues in long term residential care is “a big public health issue that we have to get right”.

“We have some of our oldest and most vulnerable residents living in nursing homes and other residential settings. We need to make sure that the safeguards are in place to protect them but also to ensure that we don’t see the risk of infection spreading from there into the community as well.”

He said the deaths of 85 men and women should give a “singular focus”. Mr Harris said the number of cases will continue to rise but the rate of growth in new measures has slowed. He said that the health service is “making sure we do everything that is humanly possible to prepare our acute hospital system to deal with the increased demand.”

“Every country is looking for the same products, the same supplies.”

He acknowledged that testing capacity has been constrained but said Ireland is still testing more than most other countries.

“The HSE has indicated it now has sufficient test swabs and more orders will be delivered in the coming days. The HSE has also been making every effort to procure other stock including sourcing domestic production of reagents.” He said the aim was still to test up to 15,000 people a day.

Mr Harris also said decision by the Dáil to sit on Tuesday was “risking public health.”

“Days we do not lead by example are days that we should regret.”

The Minister urged the public to continue abiding by the restrictions put in place by the Government.

“The message people need to hear is, you are already making a difference. There is no doubt throughout the countless efforts of so many people, lives have been saved already and we can do more. Let me be really clear, this shouldn’t in any way confuse any of us in relation to what we need to do because there can be no cause for complacency,” he said.

He said he believed the country will eventually return to normal but will not get there unscathed.

Leader of the Social Democrats Catherine Murphy said she has been contacted by several workers who are questioning why they are deemed essential including workers from a warehouse that provides supply to shops that are no longer open.

Minister for Finance Paschal Donohoe also told the Dáil that responding to the scale of the financial challenge will not be easy.

“Together we face an extraordinary challenge. In these uncertain times given the anxiety and the distress it was crucial that we did all we could to reassure citizens. We may not have got, and we did not get, everything perfect. But much of what we did was good. In doing so we have laid a strong foundation from which to recover from this crisis.”

“Shame on you,” she said to opposition politicians, “you have forced us to stray from home. There is no reason why we couldn’t have done this remotely.”

Independent TD Danny Healy Rae noted that the Taoiseach had thanked the Chinese Government for the supply of PPE equipment but added: “I would thank the Chinese as well if they had kept their virus.”

Marian Harkin said she was “annoyed” by the comment made by Mr Healy Rae. “This is not a Chinese virus. Those comments are inappropriate in this house or anywhere else.”

1 ‘Frustrated and angry’: Thousands march in Dublin to protest death of George Floyd
2 Covid-19: Easing of restrictions ‘unlikely’ to be speeded-up
3 Coronavirus: One more death in Republic as expert warns house parties are ‘disaster’ for containment
4 Large gatherings reported throughout State on bank holiday
5 Covid-19 may be behind fall in rate of sexually transmitted infections
Real news has value SUBSCRIBE